The marketing tech space is still red hot, as there have been almost $6.2 billion in deals in just the last three months. That includes $768.3 million in new funding for early-, middle-, and late-stage startups, and almost $5.4 billion in acquisitions.

The big kahuna, of course, was Tibco, bought by Vista Equity Partners for $4.3 billion. Other notables include marketing automation system InfusionSoft, which added $55 million in funding in October; BigCommerce, which took in $50 million in a new funding round in November; and Hootsuite, which added $60 million in September.

VB is studying the entire CRO space.
Answer our survey now and we’ll share the results with you.

All told, there were 52 funding, IPO, and acquisition events in those three months.

The data comes from VB Profiles, a business tracking service (disclosure: VB has a stake in VB Profiles), where we’re tracking a set of 946 companies in the marketing technology space corresponding to Scott Brinker’s ChiefMarTech marketing technology landscape. That list will soon grow, as Phillippe Cases, CEO of Spoke Intelligence, which runs VB Profiles, told me recently that he’s added companies from the Lumascape and other popular views on the mar-tech space.

Thirty-eight companies were funded to the tune of $768 million, while 13 were acquired for a sum somewhere north of $5.4 billion (nine of the acquisitions were small, with the amounts not publicly disclosed).

There was also one IPO: marketing automation superstar Hubspot, for $125 million.

Business intelligence formed the bulk of the action, of course, with Tibco. But GoodData and Alteryx show that there was more to the sector than one big acquisition. Social media marketing and listening tools continue to show momentum, with ThisMoment joining Hootsuite in the funding news. And mobile continues to be strong, with Swrve, Kinvey, and AppSee all collecting. 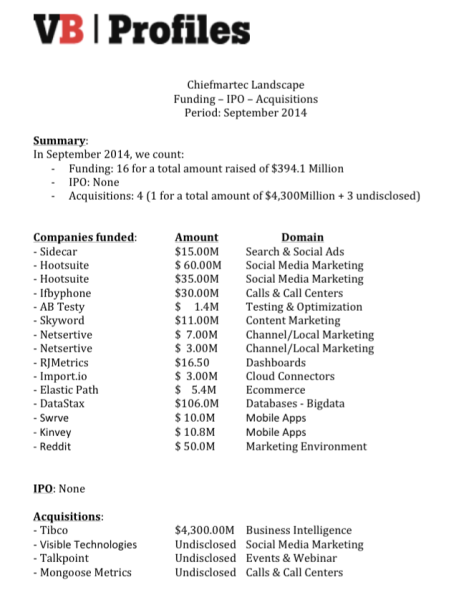 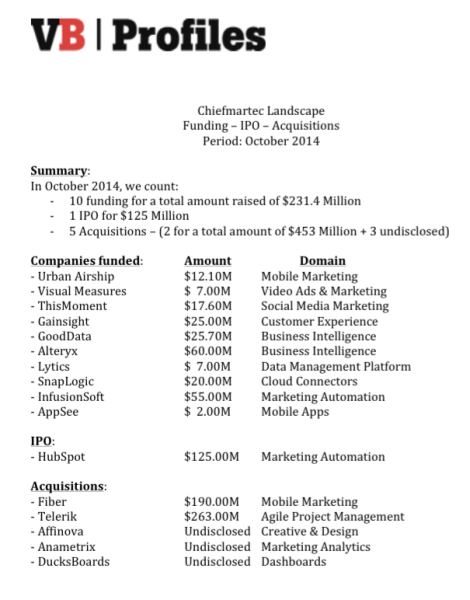 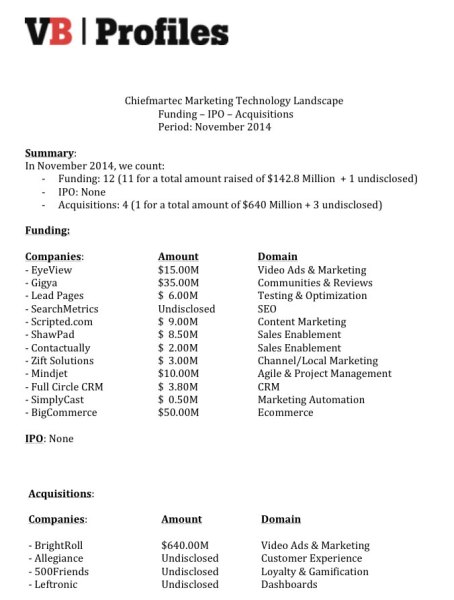