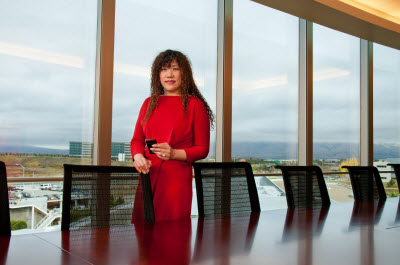 Marvell‘s Armada family of chips will provide the brains for the second-generation Google TV set-top box for connected TVs, the company said today.

The new box, which was announced in October and will be on display next week at the Consumer Electronics Show in Las Vegas. More versions of the Google TV service, coupled with boxes from new hardware makers, are expected to debut in 2012. If the products sell, Marvell will have a nice new market for its Armada chips, which are already used by the tens of millions in smartphones and other devices.

“It starts with an open platform and it uses a smaller box without a need for a fan anymore,” Dai said. “This time, we are doing it right, transforming static TV into two-way interactive television.”

Dai said that Marvell’s chips provide the foundation for a Google TV box, “like the dough in a pizza.” Google’s Android operating system is the tomato sauce for the pizza and the toppings are the apps that run on the device. The apps will be inexpensive programs that do everything from running games to viewing maps.

Google TV services can be included in a variety of devices, including connected TVs, set-top boxes, Blu-ray players, and more. Dai said that a number of partners will come forward with products during 2012. One of the big questions is whether content owners — who fear the access to pirated content that can happen with the open web — will come on board with Google TV.

Google chose to use Marvell’s Qdeo video processing technology in the Foresight platform to deliver 3D graphics, rich audio, and TV-friendly web content. Google’s grand plan is to disrupt entertainment by bringing the full searchable web into the living room, along with a cornucopia of programming choices for consumers, on an open platform. Its rivals include Microsoft with its Xbox Live online entertainment service as well as an expected Apple TV.

The hope of these big companies is to help apps take off on the TV in the same way that they have on smartphones and tablets. Dai thinks that is going to happen and that this is just the beginning of a big advance in entertainment with a breakthrough in power consumption and cost. The Connected TV Marketing Association estimates that 123 million connected TVs will be sold worldwide in 2014. Consumers using those TVs will access services like Netflix, Pandora, YouTube, Skype, Picasa and others.

Dai said the video technology will be able to run a variety of content formats, from  Flash to HTML5. Marvell has been working on the technology for the platform for more than a year.