The eBook readers from Amazon.com and Sony have been clunky. They turn pages slowly and don’t have many bells and whistles beyond wireless communications and black-and-white displays. Over time, that’s going to change as chip makers and others apply their talents to new electronic book gadgets.

Chip maker Marvell is announcing today that it has created a new ARM-based microprocessor tailored for the eBook market. Together, with Marvell’s other components, the new chip can be used in more functional eBooks with six-inch screens that could eventually cost under $100. Amazon’s original Kindle eBook reader, the most popular one on the market, costs $259.

Jack Kang, director of technical marketing at Santa Clara, Calif.-based Marvell, said in an interview that the chip maker has integrated the E Ink electronic paper technology into a specific new member of its Armada microprocessor family. No longer is it necessary to have a separate and costly e-paper subsystem. By doing so, Marvell has been able to cut about 15 percent of the costs of an eBook system. 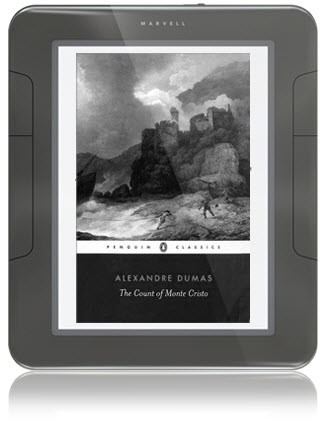 Kang said that the newer eBook readers based on the technology will be able to turn pages instantaneously in less than a second, compared to a second or more for current eBook readers. The chip will also support eBook readers with screens larger than 9.7 inches.

“The goal is to get the technology into mass adoption,” Kang said.

These new eBooks will be available in the first quarter of 2010. They won’t initially be priced at under $100, but they are expected to get there eventually. Marvell announced its Armada family of processors earlier this month. It worked on the processors, which are based on the Intel Xscale technology that it bought in 2006, for almost four years. This new eBook chip, the Armada 166E, runs at more than a gigahertz and is based on the Armada 100 series chip designs.

The chips are based on the ARM microprocessor designs, which are shipping in 600 million Marvell-based chips each year. But while others rely upon core technology from ARM, Marvell designs the cores — or processor brains — that it uses itself.

Rivals in the market for eBook chips include Freescale, Texas Instruments, and Samsung. The original Amazon Kindle uses a Marvell chip, but the newer Kindle uses a Freescale chip.

Marvell said customers for its chip will announce their products at the Consumer Electronics Show in January. Some of the devices will have two displays, including a color screen that can be used to browse through electronic bookstores. They will also have the ability to download eBooks via wireless data connections such as Wi-Fi or 3G networks. The devices may also use Google’s Android operating system.

One of the customers for the new chip is Entourage, which will use the Marvell device in its upcoming Edge eBook reader. Another Marvell customer is Plastic Logic, which is launching its Que eBook reader in the first quarter.