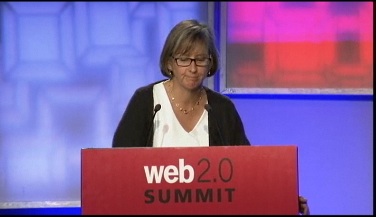 The move marks the end of an era when investment banks employed high-powered analysts to bring insight to technology trends for their wealthy clients. Meeker, who leaves Morgan Stanley to join Kleiner, was one of a generation of bank analysts who emerged as an early champion of the Internet in the 1990s, and whose excitement about the potential of Internet stocks fueled exuberance that made her banking clients millions, if not billions of dollars — but which later backfired when the stock market crashed in 2000.

Meeker was among the most respected of those star analysts. While Meeker was heavily criticized in the media, and was questioned in fraud investigations after the bursting of the dot com bubble in 2000, Morgan Stanley eventually settled with investigators and she was not charged with any wrongdoing. She kept at her game and generally won back her respect. Other famous analysts, like Henry Blodget, of Merrill Lynch, were forced to leave the industry under darker clouds.

Barron’s Magazine called Meeker “Queen of the Internet” in 1998, which is when her influence began to peak. “Everyone is connected and she is at the center,” David Beirne, of Benchmark Capital, said of her in a 1999 New Yorker profile titled “The Woman in the Bubble.”

Kleiner said Meeker will help “guide and accelerate” the social, mobile and new commerce Internet companies in its portfolio. It’s noteworthy, for Kleiner, because the firm made a huge bet on clean technology three years ago, and a dearth of hits around that time had some people starting to question whether Kleiner had lost its touch, especially on Interent startups for which it became famous (the firm, led by its partner John Doerr, has backed everyone from Google, to Netscape, Amazon and Sun). But with recent hires such as partner Bing Gordon, who invested in gaming company Zynga, which has since become one of Kleiner’s fastest-growing companies ever, Kleiner appears to be firmly back on the Internet horse. Kleiner has also done well with its iFund, designed to back mobile companies, and recently announced a $250 million sFund for social startups.

Indeed, the Meeker appointment is different from some other previous high-profile hires Kleiner Perkins, including of Vice President Al Gore, and Secretary of State Colin Powell. Those two were appointed as partners but didn’t really join the firm in anything close to full-time capacity.

Notably, rumors started floating ten years ago that Meeker might leave Morgan Stanley to join a venture capital firm, and rumors even included that she might join Kleiner.

In a statement about her move to Kleiner, Meeker said: “We’re at the beginning of another great wave of tech innovation and I am incredibly excited by the opportunity to help the next generation of Internet technologies and leaders.” She was not immediately reachable for comment.

Of course, this is good for Kleiner Perkins too, which is still in the midst of ensuring a smooth generational transition in its partnership. As a group of hungry super angels and other aggressive partnerships such as Andreessen Horowitz emerge, Kleiner needs a bullpen of heavy-hitters to remain competitive.

At Morgan Stanley, she covered the stocks of Google, Amazon, eBay, Yahoo, Microsoft and many other web companies, and has consistently won attention for her insightful presentations, including as recently as this month at the Web 2.0 conference in San Francisco, when she pointed out that online advertising must still catch up to the amount of time people are spending online, and that there’s a $50 billion opportunity awaiting.

The firm said Meeker will be based in Silicon Valley and will travel often to New York and Asia.

Finally, the move is notable because venture capital firms have generally been considered less attractive as places to join now that their financial returns have declined somewhat from the Internet heyday. Could such a move reflect a resurgence of the venture capital firm now that M&A appears to be on the comeback?