We live in a great time for accessing our media content. The market is full of devices that act as gigantic audio and video jukeboxes, streaming from various libraries to provide us the entertainment we desire in an instant.

I may have access to a ton of great songs in this media paradise, but how am I going to listen to them?

Depending on how much of an audiophile you are, the answer could involve a lot of high-end, space-hogging equipment that may not even work with a modern set-top device.

Mass Fidelity, a Canadian audio hardware startup, thinks it has the stone that can kill both of these birds: The Core. For $600, this tiny black box promises high quality stereo sound that can be piped to any room in the house.

The Core went into manufacturing a little under a year after a successful Indiegogo campaign, and should be hitting supporters sometime this week. I was lucky enough to receive two units early, and gave them a try. 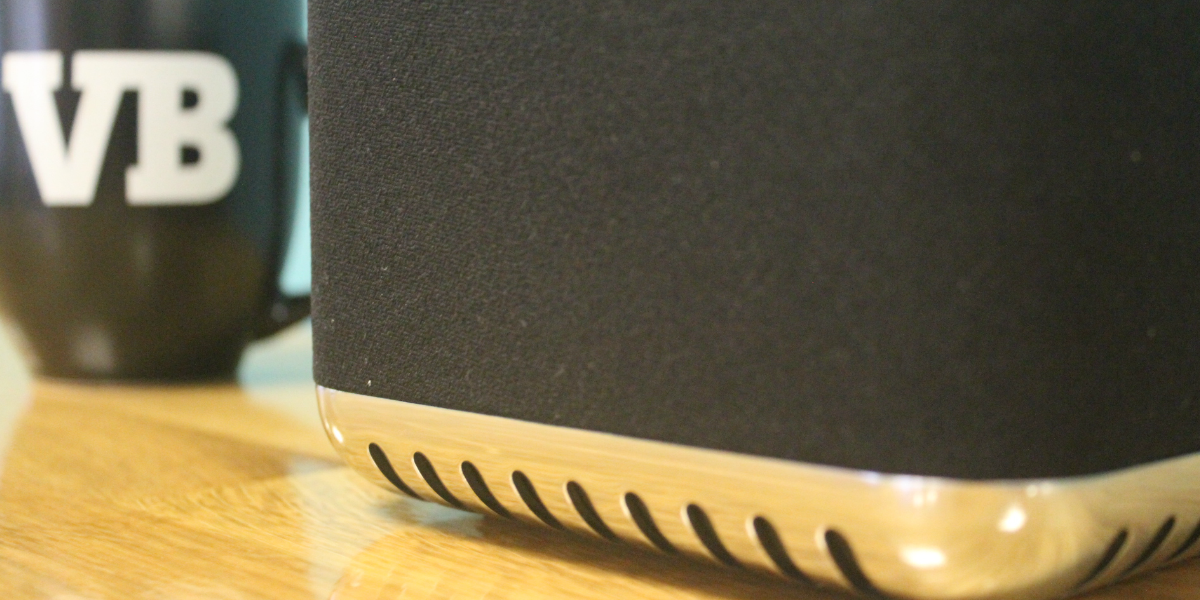 The Core is a solid 4×6 inch cube, with a cool chrome-plated bottom, and a hard, black, plastic body with a textured cloth-like exterior. The top plate has that shiny plastic finish that attracts finger prints like flies to a bug-zapper. This top plane contains a color-changing LED light, to communicate which mode the device is in, and four concave buttons representing volume up, volume down, sync, and source.

The back of The Core features a USB port, a sub-out for an external woofer, an auxiliary port, a control input, and an optical audio port. There’s also a power adapter, which charges the unit for up to 10 hours of juice (although I’m not sure why I would need to unplug it).

The back also contains a unique 20-pin connector, which is accessible by removing a chunk of black plastic. The idea behind this port is incredibly forward-thinking. Mass Fidelity appears to be trying to install an insurance policy against the future of audio. In case we encounter an audio connection standard in the future that changes how we hook our audio devices up to each other, this port could help keep The Core from becoming obsolete. So if some whackadoo standard comes along in the next three to five years, in theory, an adapter should be able to be created to fit this 20-pin connector.

Additionally, if Mass Fidelity releases the pin out for this connector, people with old audio equipment with off-connection standards may be able to create an adapter as well.

This is an amazing piece of design philosophy for 2015. The concept flies directly in the face of the current mode of consumer product development, which is stuck in the born-to-die road map. Mass Fidelity is trying to make sure The Core doesn’t become a brick if, or actually when, the next standard comes along. 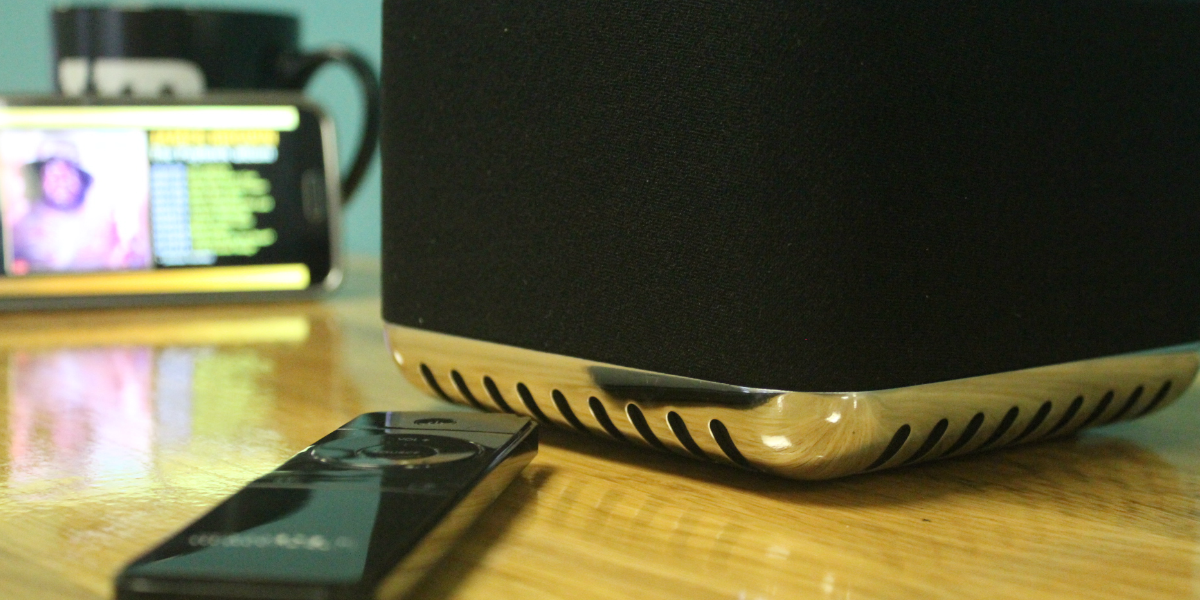 Let’s listen to some music

The stereo audio pumping out of this small black box is impressive. The Core creates a clear environment of sound, on par with having a solid left and right speaker set up, yet is generating this sound from one central location. When I walk around the room, my ears pick up the left and right channels as if they are coming from two different sources.

When the volume is set to an optimal level, which is somewhere between 5 and 10 notches below maximum, I can pick up subtleties on individual tracks. Perhaps not the best example, but one that pops into my head, is the bass drop in a drum n’ bass track I put on. I’ve heard this track a dozen times, but have never noticed that particular element before.

Mass Fidelity is claiming that The Core can reproduce the exact sounds that I should be hearing off of any track, that it should, in fact, sound exactly the way it did when it was recorded.

I’m not an audio engineer, so my ears can’t pick up enough to determine whether or not this is the case, but the music coming out of The Core has clarity and subtlety throughout. The high ends are crisp, the lows rumble. The layers of sound pull in and out with nuance. I find the level of quality I am hearing impressive as hell considering it’s coming out of one small central box. 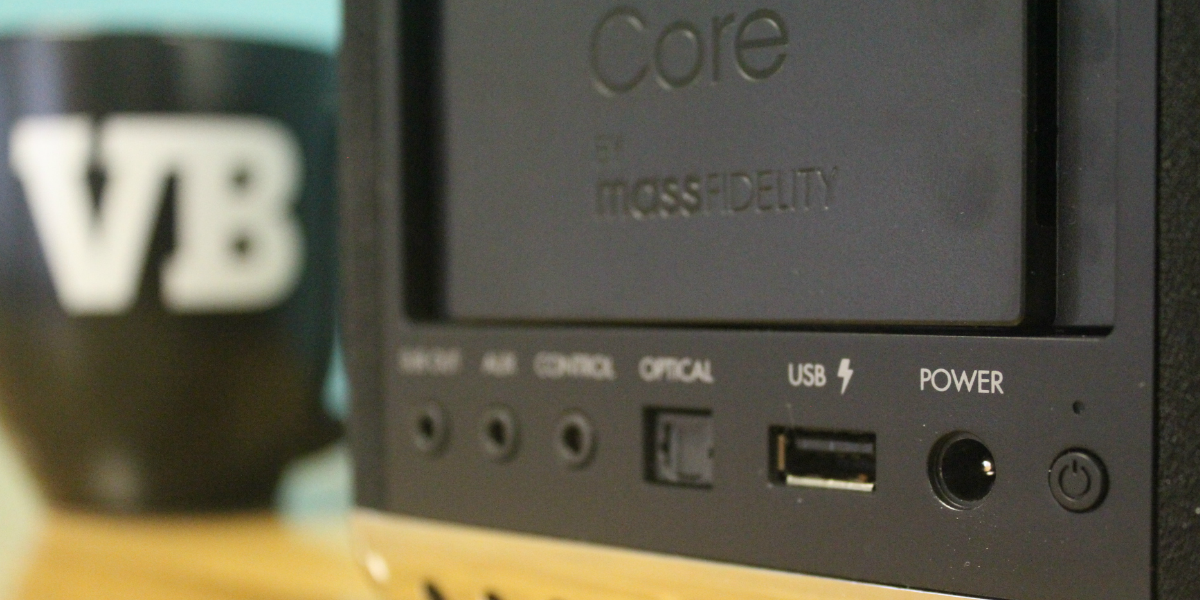 Setup for The Core is about as straightforward as it gets. Since it’s using Bluetooth, I can simply scan for The Core within the Bluetooth setting of my chosen device and sync it up. I spent a lot of time using my Android phone while testing The Core, which is perfect for playing mp3 tracks and streaming off of YouTube.

There’s an added bonus to using my phone, which is that The Core also functions as a decent little speakerphone device as well. All audio during a call, incoming and outgoing, is handled by The Core.

If I don’t want to use my phone, I can just turn on another Bluetooth-friendly device and sync it up. One machine that gave me issues, however, was the PlayStation 4. I could see The Core in the list of Bluetooth-enabled devices, but the console didn’t want to connect to it. I suspect this is an issue on Sony’s end, though, rather than Mass Fidelity’s.

The Core also supports multiple units working together. I placed two of The Core boxes in different rooms, and made one device play a song from my phone. After I hit the sync button, it took the two devices about 5-10 seconds to work out which one was the parent before pumping the song in sync. Obviously, this is a really great feature for parties. 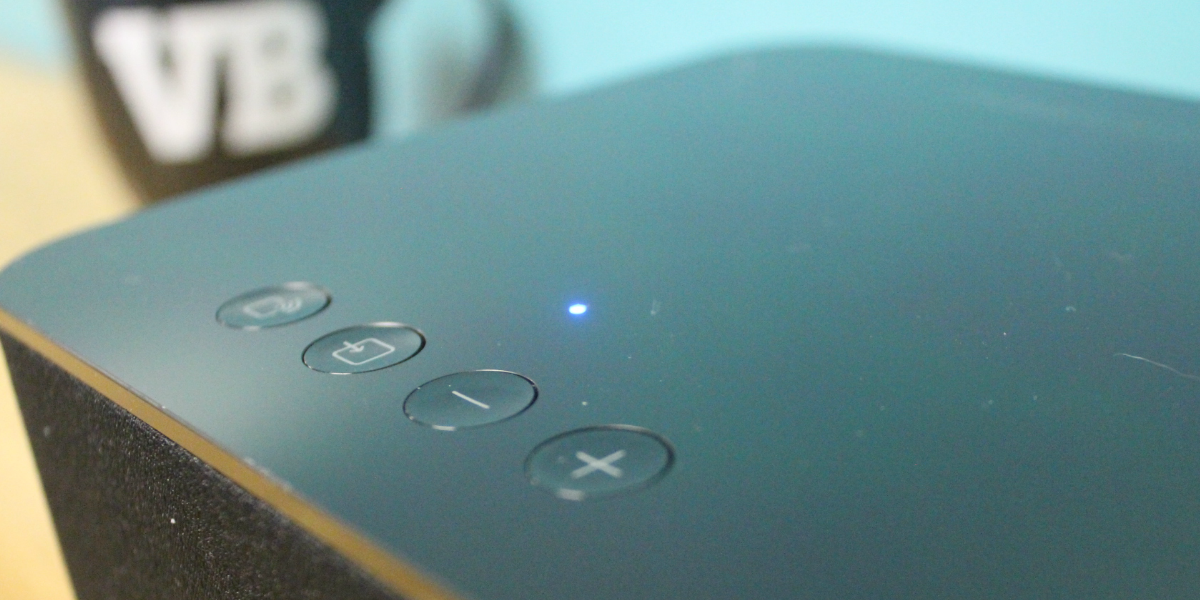 There’s only one hang-up I have with The Core, and it isn’t technical: it’s the price. The Core is rocking a price tag of $600, which induces a spit-take in someone of my economic status.

High-end audio is expensive, but the price point here seems at odds with the design philosophy. I am under the impression The Core was manufactured for the ramen-eating audiophile who lives in an incredibly tight space.

Then there are people like myself, who live in a larger home and would love to have multiple units throughout the house. At $600 a pop, that’s a ton of cash to burn.

Maybe I am making a huge assumption about who this is geared toward?

The Core is a high quality chunk of audio technology that offers great, clear, stereo sound in a tiny black box. As far as design and function go, every step made by Mass Fidelity’s design team has been strong. If I had the budget, I’d rock one of these in every damn room in my house.

But that’s the thing; I can’t afford to do that!

It’s evidently geared toward people who have no issue dropping $600 on a compact audio unit. If you’re that person, I think The Core is definitely a good way to go.