Meebo, the online instant messaging company, has been picking up users at a rapid rate, breezing along with high-profile backing by VC firm Sequoia Capital.

But its move today to deliver games on its platform is its most ambitious move yet to take it from a comfortable, small startup into the big-leagues where “the rest of us” will finally hear about it. It is also allowing game makers to insert ads, and make money from them.

Today Meebo releases more than 20 games from 14 partners, including chess, poker, puzzle and other popular casual games, for its users to play. Meebo is well-suited for games because it has something called “presence,” meaning Meebo users can tell when IM buddies are online and can invite them to play games right away.

Meebo first made the first step last month, when it opened itself to developers to create applications. The company plans other application categories — in shopping, work, music and video. Since launch, more than 200 developers have created Meebo applications.

In fact, Meebo also announced today that all application developers can sell their own ads for their applications. The other option is that developers can elect to share revenue 50/50 with Meebo. Mochi Media, an ad network company that makes money by embedding ads inside games, is launching a game on the platform. Gaming site Kongregate is also a launch partner.

Meebo seeks to create a standardized ad unit that would include a small icon, a headline, a description, and a link, according to Martin Green, Meebo’s VP of business. Meebo already runs ads similar to this on their front page. The idea is that standardized ad sizes make it easier for advertisers to build an ad and display it across many different websites. Meebo is still working on the exact design of the ad unit.

As I wrote here, making games available to Meebo users enables spontaneous game play among friends that is not available on casual gaming sites. That is, playing games on Meebo means you play with friends, instead of with strangers. This is important for two reasons. First, playing games with friends is generally more desirable than playing with strangers. Second, the implication is that Meebo could spur “social gaming” amongst friends, something that until now has been constrained because it is harder to coordinate visiting a casual gaming site with friends than simply IM’ing buddies invites to play.

Here’s how games could drive Meebo growth. Meebo users can now invite any IM buddies to play games, including non-Meebo users. The invite arrives as an IM and contains a link to a Meebo.com page where the game is played, just like other Meebo Platform apps. Non-members click through, and suddenly they’re on the platform. Those new users can decide whether to return to Meebo. The enticement will increase as engaging applications are built.

If it hasn’t occurred to you yet, we’ll say it: This is beginning to sound a lot like Facebook.

The bottom of the Google Trends graph compares press mentions of Facebook and Meebo (Facebook is in blue and Meebo is in red). Mentions in May for Facebook (when Facebook’s platform launched) far outnumber those for Meebo in the past few weeks since its platform launched.

Facebook is a year older than Meebo and, according to Green, Facebook is also only a year ahead of Meebo in terms of user growth — suggesting he thinks Meebo in a year can become as big and relevant as Facebook is today. Making that comparison is a bit premature. Facebook has transformed itself from a possible Yahoo acquisition target into a standalone private company considered a potential threat to Google. Part of Facebook’s explosive growth can be attributed to the fact the company opened up to all users a year ago, whereas before then the site was limited to college, work and high school users. In contrast, Meebo has been available to any users since it launched. Facebook currently has 54 million active monthly users, whereas Meebo has 6 million unique monthly users.

Meebo users typically stay on Meebo.com, while only occasionally refreshing the page, whereas Facebook users generate over 65 billion page views per month, meaning there are more pages and places for Facebook to serve ads than Meebo. That said, Meebo users tend to stay on the Meebo.com page, creating an opportunity to show new ads in regular intervals. Also, Meebo users do not maintain profiles like users do on Facebook.

By the end of this year, Meebo plans to release its own version of Facebook’s news feed, according to Green. The feed might list activities of IM buddies such as which Meebo applications they use and other activity information — which could drive usage of Meebo app’s.

Building a news feed on Meebo will require introducing a whole new set of behaviors to Meebo users. If Meebo users get annoyed, leaving Meebo can be as easy as logging into an AIM, MSN or Yahoo IM client instead. In other words, maintaining a high quality user experience is essential.

Might Facebook try to replicate Meebo’s strength by enabling real-time applications sharing “presence” information with Facebook developers? For now, Facebook can only offer real-time interaction if friends happen to be using the same app at the same time. Facebook lets you see which friends were “recently online,” but doesn’t let you do real-time chat. Enabling real-time chat and presence throughout the Facebook site might require a significant development effort by Facebook. Facebook could also build its own version of Meebo inside Facebook. The idea is Facebook users doing IM’ing inside Facebook could increase time spent on the site and be another potential growth mechanism by giving Facebook a chance to attract Facebook users’ IM buddies who aren’t currently using the site.

This would expand upon Facebook’s existing deal with AIM, which lets Facebook users invite friends to Facebook by sending out IMs. 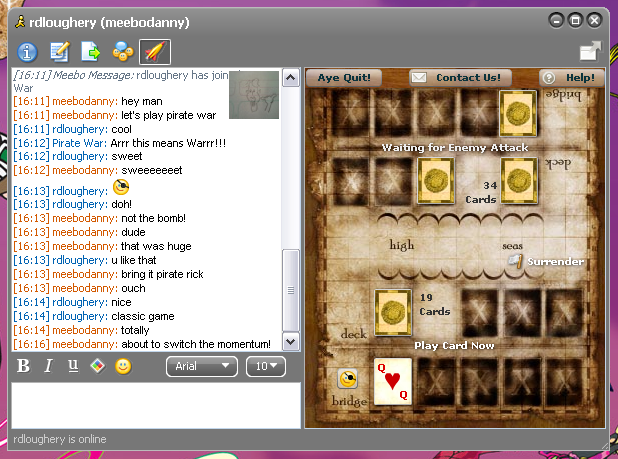