It is significant because it could help make applications on Facebook more social, thanks to real-time communication. However, it will also let people chat using their real names, and these conversations can be found by search engines — and so will test anew the Facebook community’s tolerance of such things (privacy, in case you haven’t noticed, has been hotly debated recently on Facebook).

Meebo, though still young, is gaining clout. The company reports usage of its service is growing strongly.

It now says 16.5 million people a month use Meebo Rooms, a service introduced in May (see our coverage), which allows chat conversations to occur off its site. However, that number may be somewhat inflated because it counts people who have landed on a third-party Web page with Meebo Rooms embedded in it, but who may not have interacted with the service.

In any case, even if you cut that number in half, the growth is still significant, because the company in recent months referred to having 6.5 million unique users directly to its own site.

Meebo’s popularity stems from letting people instant message with others from a single online page, even if they’re using different services (AIM, Google, Yahoo, MSN, etc). It doesn’t require any software downloads, so students, in particular find it convenient to use when they login from any computer they happen to be using at school. However, they can now just as easily do this from other sites. The Meebo Rooms widget can be embedded in any site across the Web, and is popular at places like MySpace.

The Meebo Rooms widget for Facebook applications is called “Partner Edition.” The company launches with partners including BuddyMedia, (fluff)Friends and Watercooler. See image below for an example of how it looks within the Acebucks application.

Martin Green, Meebo’s VP of Business, told VentureBeat that chat in Facebook is unique because people chat with their real names, as provided by Facebook. The idea is that people behave differently when they are representing their true selves.

At launch, Rooms on Facebook do not include ad space, but Green said Meebo will add one early next year. The idea is Meebo wants to build a standard ad unit, as we reported here.

Other features of Meebo Rooms Partner Edition include brand design customization, automatic creation of new rooms when capacity is reached, advertising tracking for the ad unit (starting early next year), and traffic and data reporting to determine campaign success.

Chats on Rooms in Facebook, like other sponsored Rooms, will be recorded and available to be indexed by search engines. What’s different this time is that transcripts of Facebook chat will contain users’ real names, whereas most Rooms to date have been with anonymous names or screen names, with the exception of select deals like with VH1.

This raises a question about user privacy because chats occurring inside Facebook are attributed to the person typing it, and these chats can be discovered now by anyone Googling the person’s name. Green pointed out there is a disclosure explaining the indexing. Green also said privacy has not become an issue with other indexed chats. He said that users chatting in groups have the expectation that their comments will be read by strangers in the chat room, and by extension it’d be ok to make those chats available to people searching the web. However, recent incidents may contradict Green’s view. For example, some users of public IRC channels, while knowing that anyone could read their chats, were shocked to find out that they were being indexed for search engines.

It remains to be seen how users respond to chat indexed with their real names. But the move is interesting, because it marks Meebo’s first major effort to develop for Facebook and could help make applications on Facebook more social thanks to real-time communication. Chatting with people using their real names creates an opportunity for higher quality conversation than anonymous conversations.

A final note on the Meebo’s user numbers. Meebo has drawn users with Meebo Rooms because it automatically offers accounts to new visitors who previously haven’t used the service. However, as mentioned above, some of those 16.5 million users spend time chatting, others watch and others don’t interact with Rooms at all because they don’t notice it or are on the page for reasons other than chatting.

[Disclosure: Doug Sherrets owns a small number of Facebook shares. He is a contributing author at VentureBeat. He recently started working at Slide.] 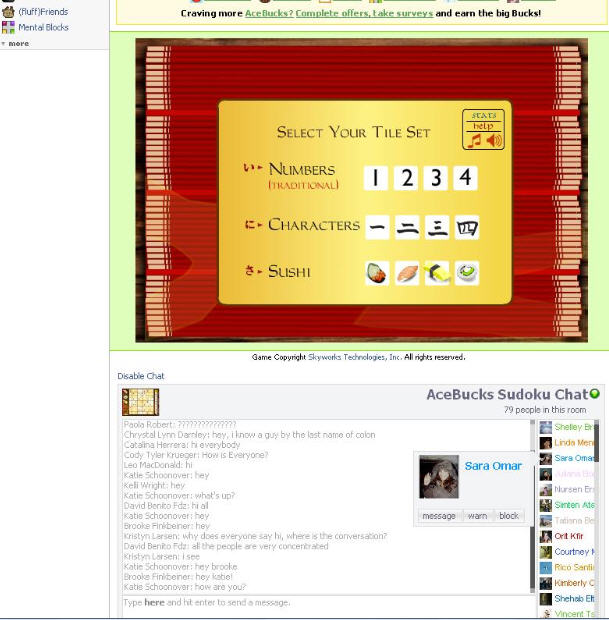