Meebo, the Silicon Valley company that lets you message across multiple IM services from a single Web site, is taking significant pains to make money from its millions of users.

Last month, it launched a way for outside developers to produce games and other content to be offered on the site, allowing them to keep half the revenue. A few weeks later, the Mountain View company gave the developers an option to run their own advertising and keep all the revenue.

Application owners will keep half the revenue from these ads, while Meebo and VideoEgg will split the other half.

Since its launch, Meebo Platform has attracted more than 300 applications. More than 40 applications can be used by more than two people in real-time. Companies developing apps include TokBox, Mochi Media, Kongregate, ustream.tv and TalkShoe.

VideoEgg said Meebo’s high engagement — one million users spend more than 2.5 hours on the site each day — is a good fit for its so called EggNetwork, which reaches over 50 million users. The more you use an application, the more you’ll see these ads. VideoEgg advertisers include over one hundred Fortune 500 companies, it says.

As reported two weeks ago, Meebo is busy building an ad unit it hopes will be a standard, as recognized by the IAB. The idea is a standardized ad unit makes it easy for advertisers to buy ads across multiple sites.

The ad unit Meebo described — a small icon, a headline, a description, and a link — is different from unit used by VideoEgg.

Meebo’s deal with VideoEgg appears to be an intermediate step: Plug in ads from a proven brand ad player like VideoEgg, then get working on building out Meebo’s own ad solution.

The first screenshot below shows an example of a VideoEgg ad. The second screenshot shows what happens when you click the ad. 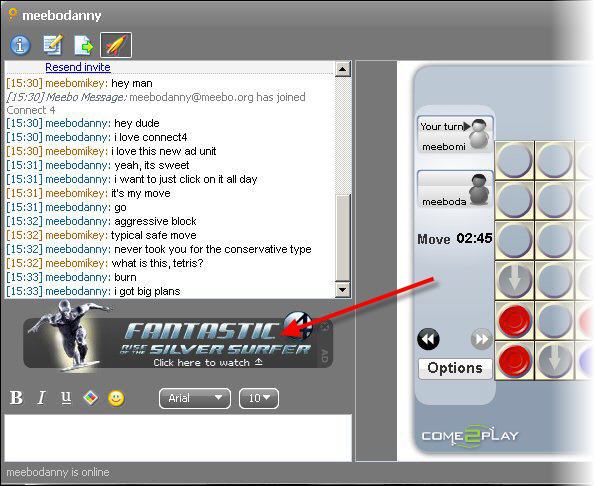 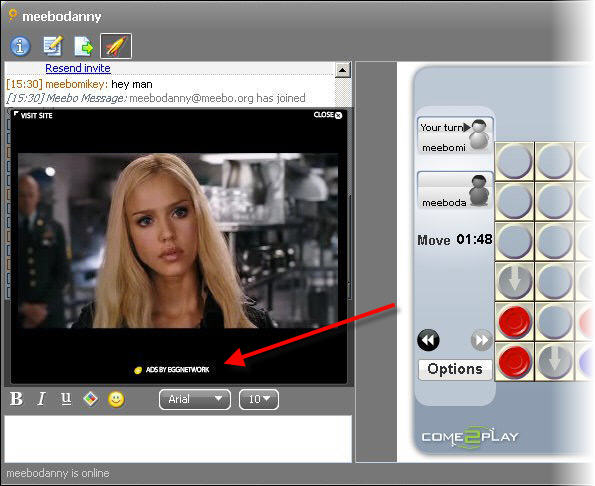