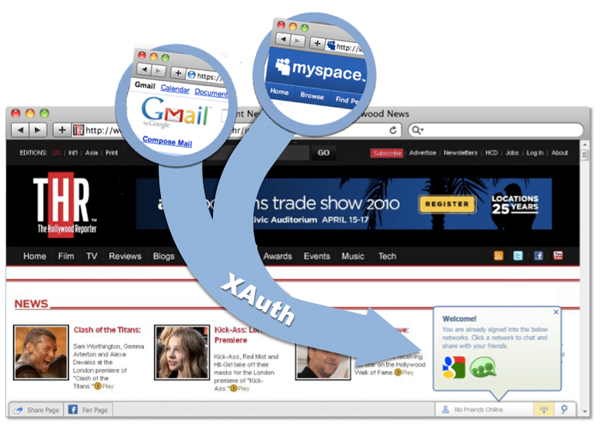 As Facebook pushes to make its “Like” button a standard on the Internet, not just its own website, Meebo, a smaller startup based in Mountain View, Calif., is trying to solve the problem through a new Web standard called Extended Authentication, or XAuth. And it’s got Google in its camp.

“It’s about giving [users] the services they care about,” said Meebo CEO Seth Sternberg in an interview with VentureBeat. And also, crucially for Meebo, it’s a chance to show users an ad.

Meebo is best known for its online chat rooms, which let people sign on to a variety of instant-messaging services to communicate with each other. But it’s expanded its offerings with an intriguing advertising offering. The Meebo Bar, a toolbar that publishers place on their site, features a persistent ad as well as links that allow users to drag pictures and links to share them with their friends on a variety of services, from Twitter to Facebook on down.

The trouble for Meebo and its publishing partners, which include the likes of Time Inc. and MTV Networks is picking which services to show a given user. One might guess that Digg would work for a site with a young, heavily male audience, or that Reddit would be appropriate for a more tech-savvy audience. Or you could actually figure out which sharing services a user belongs to and only show those.

But hitting the top 20 sharing sites one at a time would slow page loads to a crawl. XAuth could offer “a lot more performance for the sites,” said Joseph Smarr, a social Web engineer at Google who helped develop the standard.

Supporting the XAuth standard fits well into Google’s strategy of pushing open Web standards. But it also could help Google slow the growth of Twitter and Facebook, both of which are pursuing separate strategies to make their social sharing services integral parts of other websites. By making it easier to include second-tier sharing services — a category that includes the controversial and underperforming Google Buzz — XAuth could make Twitter and Facebook just two easily replaced sharing options, rather than services hardcoded into websites.

Microsoft, Yahoo, MySpace, Disqus, and a handful of other players are also supporting the standard. What they all have in common: They’re not Facebook or Twitter.

The challenge with XAuth: privacy. Even though it’s fairly easy to discover that a given person belongs to, say, Facebook or LinkedIn with a simple Web search, there’s something creepy about a third-party site knowing all the services you belong to. There’s the potential for a backlash similar to the one Google faced with Buzz, which turned Gmail users’ private contacts into a public social network. Google had to rapidly change course and make much of the information it exposed about its users private again.

XAuth will have a website, XAuth.org, where users can disable the service altogether. But that means users will have to opt out of the service instead of explicitly opting in.

The Hollywood Reporter, which features the Meebo Bar, plans to adopt XAuth, but the service is not yet live on that website. (A mockup of how it might be implemented is featured above.)

Google’s Smarr acknowledged that XAuth could raise privacy concerns, but pointed out that the service as implemented by Google only informs website publishers that a given user has a Gmail account.

“I always think back to when people got freaked out when they realized you could do a Google search and find out about them online,” said Smarr. “There’s no doubt that there’s a lot of user education [needed].”

And that may be the ultimate challenge for XAuth. Facebook and Twitter’s single-service implementations don’t require a lot of education. You’re already on Facebook, right? Why not share things there?

“There are all these questions that have to be answered,” said Smarr. “The status quo is not good for anyone, because we end up shutting out users who use one of the smaller sites. There has to be some mechanism to experiment to find the right balance.”