Meebo, a startup that lets you chat online with friends across rival instant message services, will next month launch a service called Community IM, a white-label platform where other sites can offer their own web-based IM services.

It’s the latest bid by the Mountain View Calif.-based company to expand beyond the 35 million users already on its home site and on its group-chat embeddable widgets, and so gain more advertising dollars.

Facebook spent around a year working on the one it launched earlier this year; MySpace also has a web-based chat service in development, I hear. So Meebo’s forthcoming service, among other things, could make life easier for other social networking companies wanting to offer something competitive. 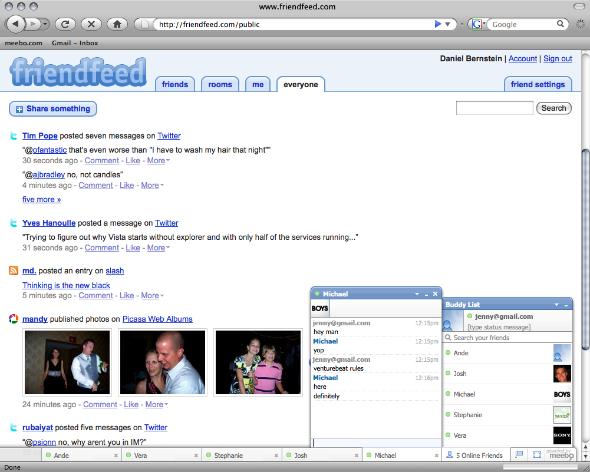 With eight initial partners, Meebo will reach more than 56 million web users, according to comScore. These include MyYearbook, Piczo, Flixster, AddictingGames and a range of smaller content-focused sites. Meebo also plans to announce eight additional partners next month, that will further increase its reach. Next year, it will expand the service to let any site use this technology.

Community IM will also feature a new interface. On a toolbar beneath a partner site, such as teen social network MyYearbook, you can see a list of friends who you already IM with. You can toggle it and pop out individual friends within the toolbar, similar to the interface for Gtalk within Gmail. See screenshot, that the company made by altering a FriendFeed page (the two companies don’t have a relationship).

Reaching more users is part of Meebo’s plan to make more money. The company has already spent the summer working out deals with advertisers, and says it is happy with the revenue already coming in. But because Meebo’s audience is spread across its home site and widgets, it needs greater reach to appeal to large advertisers.

Meebo is working with its partners to sell a variety of ad formats that can run within buddy lists, rooms, and conversation windows, and split revenues. These ads have already shown exceptionally high click-through rates, the company says. It follows on previous its previous ad efforts, like interactive ads.

In sum, we and others have sometimes wondered how an IM aggregator services like Meebo — or rivals like eBuddy — could become big businesses. Now, we’re starting to see how.