A version of this story originally appeared in the Telegraph‘s Wonder Women series.

On both sides of the Atlantic, entrepreneurs are proving that you can make money and do good at the same time.

This trend, which the media often call “social entrepreneurship,” scarcely existed a decade ago. But it’s thriving today with the support of impact investors and high-profile policymakers, such as U.K. Prime Minister David Cameron and New York Mayor Michael Bloomberg.

In Silicon Valley, a startup called Change.org is fast becoming the poster child for the movement. At its helm is an energetic young founder, Ben Rattray, and a seasoned technology executive, Jennifer Dulski. Since launching in 2007, the San Francisco-based company, which gives people a way to create and conduct online petitions, has raised more than $15 million from eBay founder Pierre Omidyar’s investment firm, Omidyar Network.

On Change.org, ordinary people have started petitions to fight local and national governments, corporations, and human rights violations — and won.

Dulski, 41, is the most recent addition to Change.org’s executive team. She first came across the website in 2011, when the parents of Trayvon Martin posted a petition to prosecute their son’s killer, whom police had initially failed to charge. Almost 2.3 million people signed that petition, and she was one of them. 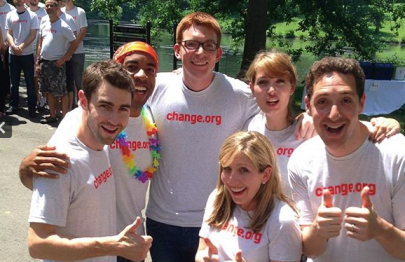 Above: The Change.org team at a company event.

At the time, she had a high-paying, high-level position at Google’s shopping and ads group, a position she assumed after becoming the first woman to sell a company (a deals merchant called DealMap) to Google.

She left Google for Change.org, and nine months after being named president and chief operating officer, VentureBeat asked Dulski to discuss her new role. We asked Dulski how she is working to encourage more people (especially young women) to take a stand, and her advice for becoming a social entrepreneur.

Dulski has founded companies and joined startups in the early stages. She started her career by founding a nonprofit: an academic program to help disadvantaged kids in urban Pittsburgh go to college.

Her advice to would-be social entrepreneurs is to prepare for extreme highs and plenty of setbacks. For example, it took Change.org’s founder the better part of two years to settle on a profitable business model.

She also recommends publicly committing to your company’s mission, as you may face pressure from potential investors to sell, go public, or otherwise “put short-term profit ahead of your vision.”

You’ve also got to consider your users, and create a compelling experience. “A social good business needs to do the same thing as a traditional business: answer consumer demand,” she said. Change.org aims to solve the challenge that ordinary people don’t have the tools to make an impact on the issues that mattered to them.

However, not everyone is cut out to start a business. For people whose talents are best suited to a specific functional role, she recommends joining an early-stage social good business and helping it scale.

Activism 2.0: Is the Internet the new way to protest?

Dulski is leading a team of Change.org employees, who are performing in-depth analysis on how people engage with petitions.

Top 5 issues that women are more likely to take action on than the average Change.org user:

Dulski believes that women need more positive role models and success stories. She recently invited a high school student called Emma Axelrod to join her on stage at a recent conference. Axelrod and two friends had started a petition on Change.org that spread like wildfire and ultimately secured CNN’s Cindy Crowley as the first female presidential debate moderator in 20 years.

In her experience, Dulski has found that the Internet has made it easier for people to push for change — and that’s a good thing. She doesn’t buy into the notion that the web has turned us into lazy activists, or “slacktivists,” and is often asked this question.

“We can mobilize crowds faster and more effectively than in the past, and have the same impact, if not more,” she said.

She added that starting a petition, or signing one, is now a viable alternative to “protesting for months in the street.”

Encouraging Change.org employees to be leaders

Many social businesses practice what they preach — the culture is fundamentally different than at ordinary corporations. Since joining Change.org, Dulski has spearheaded a number of internal projects. She set up a mentorship program, which pairs up men and women with different skill-sets to advise each other.

She is particularly passionate about supporting female leadership. So she encourages female employs to share their expertise with the entire staff in lunchtime sessions. For instance, a designer recently gave a presentation on user experience design fundamentals, and an engineer established a popular computer programming workshop.

Interested in joining a social good company? There are openings at Change.org for engineers and designers as well as a variety of non-technical positions. One of the coolest roles at Change.org is in the petition support team. Employees are trained to spot the campaigns that are likely to win, and help the petition-starter gain more signatures. The public relations team will then reach out to the press to offer interviews, and put pressure on the powers that be.

Change.org pays its engineers (and employees, in general) at a market rates, but offers more worthwhile work than most companies.

“You can wake up every day and look at the legacy you’ve left and feel good about it,” she said.