2013 was the year that business software became “sexy.” It wasn’t just the sheer dollars that poured into the space, but the people and ideas that transformed the way we do business.

Young and energetic chief executives, such as Box‘s Aaron Levie and Dropbox‘s Drew Houston made cloud storage seem accessible. Fast-growing startup RelateIQ got us thinking about what’s next for customer relationship management (CRM). And “big data” companies like Quid, Kaggle, and Metamarkets rose to prominence by forming online communities of data scientists.

It’s about time that enterprise startups got their share of attention — and not just consumer apps. So VentureBeat’s enterprise team interviewed our network and compiled a list of the vendors and visionaries that impressed us most this year. 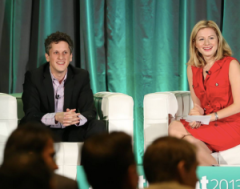 Aaron Levie, 28, was on a crusade this year to make enterprise cool, and it totally worked. At Boxworks, the company’s recent conference, Levie paced the stage, cracking some (actually funny) jokes and discussing plans for his billion-dollar cloud storage company. In interviews, Levie talks a mile a minute, always giving us the impression that he’s thinking about ten steps ahead. He usually is.

“The software you’ll see in the enterprise needs to be far easier to use,” he often says. Box is a threat to some legacy players like Microsoft, as it’s designed with ease of use in mind, unlike most business-focused software.

Box’s customers include 97 percent of the companies on the Fortune 500; the technology is used by an estimated 20 million people. But 2014 will be Levie’s year. An initial public offering is likely on the horizon; revenues will be sky high if the sales team’s strategy of pitching vertical sectors one-by-one (health, education, financial services, legal and so on) ultimately pays off. With Levie at the helm, we’re excited to see what’s in store. 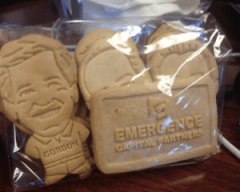 Above: That Emergence Capital Christmas gift

Emergence Capital‘s founder Gordon Ritter made a name for himself by investing early in Salesforce. But this year, Ritter’s investment strategy shifted. Rather than funding startups with a broad approach, his firm is focused on software for specific industries, such as health care or finance. This vertical approach paid off when a little-known cloud company called Veeva Systems experienced a soaring initial public offering earlier this year.

Emergence, Veeva’s biggest investor, had a stake worth $1.2 billion, which is roughly a 300-fold return on the original investment. In an interview following the IPO, Ritter reiterated his view that the next wave of the cloud is “focused on industries and real customer successes.” He may well be right.

We were also intrigued this year by enterprise-focused funds Data Collective, Venrock Capital, and the CIA’s venture firm, In-Q-Tel.

And Bloomberg Beta, an early stage fund that Bloomberg L.P. launched this year, won points for publishing on GitHub its lengthy “operating manual,” which contains questions the fund’s investors like to ask, its funding process, and other characteristics of the fund that entrepreneurs otherwise probably wouldn’t know.

But Emergence’s hilarious Christmas gift clinched the win. It showed us that they don’t take themselves too seriously, even after such a stellar year. 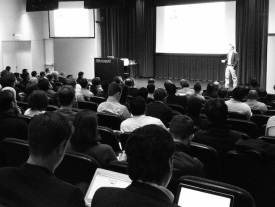 Investors are on the hunt for revenue-generating companies that are building software for businesses, not consumers — and that’s Alchemist’s sweet spot. We exclusively covered the launch of the new Silicon Valley-based startup accelerator earlier this year, and have reported on the first batch of graduates, many of whom have gone on to bag a sizable seed round.

Alchemist is run by Ravi Belani, a highly personable and well-connected former venture capitalist. His accelerator has already generated a great deal of buzz, and interest from VCs.

“It’s fun to build stuff and make money,” said Belani. “And in the enterprise, your first customers will write million-dollar checks.”

Belani will only take on 10 teams per quarter. He has already raised enough money to fund 90 companies in the next two years. 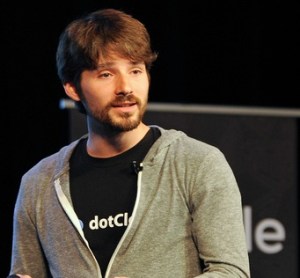 This year, observers of the cloud-computing industry started wondering about the real value of Platform as a Service (PaaS), a category of products on top of which developers can build and run web applications.

But one company has succeeded in casting aside its original identity as just another PaaS and taking up a whole new appearance as a provider of open-source technology that saves developers time and effort as they get their applications ready to go.

That company, Docker, was called dotCloud up until a couple months ago, when it changed its name to better reflect its close relationships with the technology it had released under an open-source license earlier this year: Docker containers. Engineers at eBay and other companies have flocked to the technology, and cloud providers such as Google have adding support for it.

The company plans to release commercial services based on Docker containers and provide commercial support to people who use them. Partnerships with vendors who embrace the technology could bring in money, too. 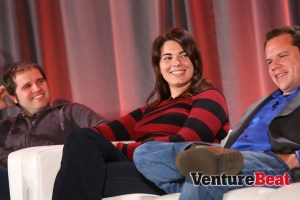 Above: Rogati at the Data Science Summit

Users share lots of information about themselves on social media sites like LinkedIn and Facebook, including their clicks. Those companies’ data scientists have plenty to mine for ideas on which features ought to get scrapped and what product managers could do to propel the companies forward. And they can also put together cool infographics full of trends they observe.

But more and more data is coming from machines. Sensors capturing temperature, sound levels, and other kinds of information are becoming more ubiquitous. Connected devices such as the Fitbits and Jawbones are among the sources of data in the fast-growing Internet of things.

That’s why it’s exciting to think about what Monica Rogati will be able to do in her new job as vice president of data at Jawbone. Rogati, formerly senior data scientist at LinkedIn, has already started whipping up digestible insights based on data from the UP wristbands her company sells. Expect her contributions to the company to go beyond that sort of output, though.

Speaking at VentureBeat’s DataBeat/Data Science Summit event earlier this month, she talked about her interest in “data products.” The term doesn’t simply mean interpreting people’s clickstreams on a website.

“It’s also about taking data and turning it into a product,” she said. She didn’t elaborate on the data products she wants to produce. But her work is worth watching.

So what if IT administrators won’t be the only ones to see it? It could prove influential as more people start buying connected devices and more companies jump into the market. It might also provide to end users suggestions for improving their health. And that could well be more important in the long run than slight improvements in ad targeting.

The startup worth watching: RelateIQ

Above: DJ Patil, vice president of product at RelateIQ

Lots of companies release add-ons for Salesforce.com’s software for tracking customer leads, showing how the product isn’t perfect by itself. Fewer companies have the guts to call into question that whole category of software, known as customer relationship management (CRM), into question and offer a truly different solution for the same problem.

RelateIQ is one such company, pitching “relationship intelligence” as a smarter tool for salespeople to stay on top of conversations with all their important contacts.

Data from multiple applications, including LinkedIn, Office 365, and Gmail, can be pushed into RelateIQ, which provides desktop and mobile applications. And the tool just pulls data in from incoming and outgoing emails, without requiring users to do anything special. It sends users reminders of how and when they should follow up.

It wouldn’t be surprising to see RelateIQ get smarter. It’s got some serious data science talent on hand. DJ Patil, a co-creator of the now-hot term “data scientist,” joined the company after being data scientist in residence at Greylock Partners and previously head of data products at LinkedIn.