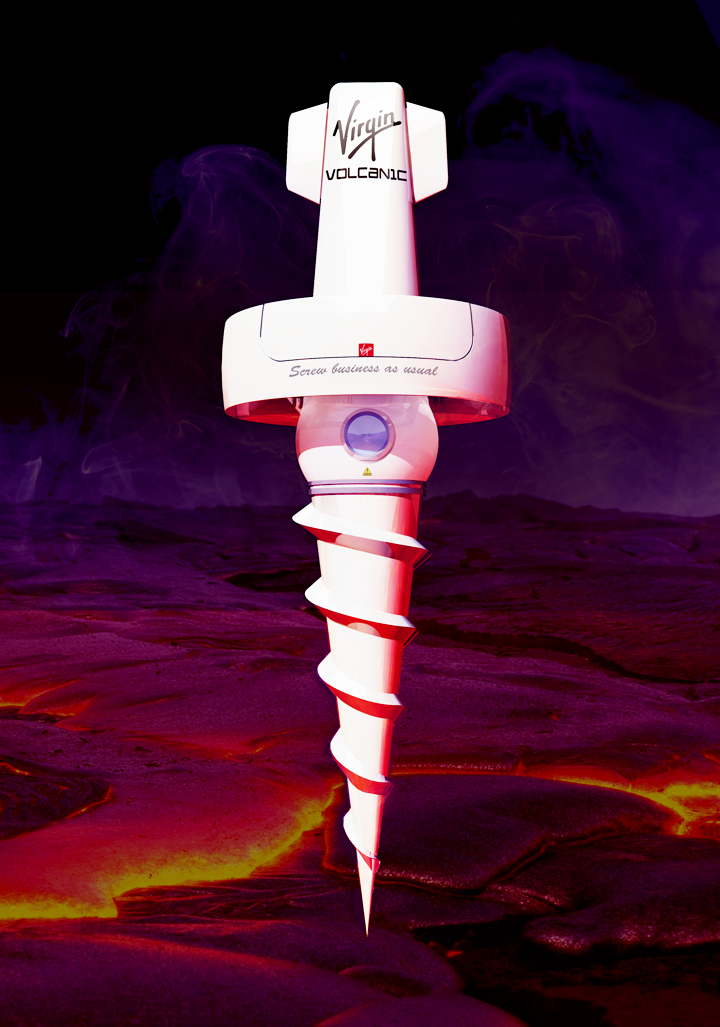 Screw space travel, the next big thing in world exploration is way hotter.

Sir Richard Branson and Virgin have today announced Virgin Volcanic, a vehicle that will take three people to the molten lava core of active volcanos.

The corkscrew-shaped vessel, named VVS1, will dive deep into the earth’s core beginning in 2015 and start with trips to the five most active valances in the world: Etna, Stromboli, Yasur, Ambrym, and Tinakula. Branson, a self-professed “Volcanaut,” will be joined by celebrity pals Tom Hanks, Will.i.am, Seth Green, Arnold Schwarzenegger, Stephen Hawking, and Barbara Kopple on the first few volcanic expeditions.

“A window seat for a journey to the liquid core of our home planet would be a bargain at twice the price,” Hanks said.

Sounds like one hot ride, right? But before you start pinching your pennies — a deposit alone will set you back 100 million of them — and packing your bags (what does one wear when journeying to the earth’s core?), let us take a little commercial break and remind you that the Virgin Volcanic is being introduced on the eve of April 1.

Sorry sojourner, this volcanic craft is as real as Google’s 8-bit Maps cartridge for NES.

Kudos to Virgin, though, as the brand has smartly gone with a strong social push of the Vigin Volcanic hoax on Facebook, Twitter, and Google+. Branson, himself, is tweeting up a storm about the launch. One might even go so far as to call the campaign — wait for it — groundbreaking.