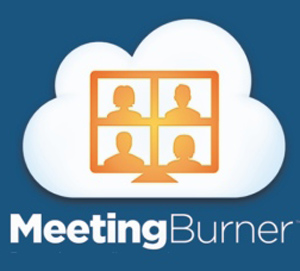 Online meeting and webinar startup MeetingBurner wants to do what many companies aim to when they enter a crowded market — undercut the competition by offering a better product at a lower price. The company, which today enters its public beta phase, is in a heck of position to accomplish at least part of this goal because it believes 95 percent of its customers will use the well-featured service completely free.

“Maybe I shouldn’t be saying this, but small meetings are cheap,” MeetingBurner President John Rydell told VentureBeat. “We’re going to make our money from bigger clients that want features like analytics, but we’ll build good will and word of mouth by letting small [groups] use it free.”

MeetingBurner’s feature set and capabilities have a lot in common with competitors like Cisco’s WebEx, Adobe’s Connect, and Citrix’s GoToMeeting, the three biggest players in the online meeting space, and AnyMeeting, an ad-supported online meeting platform.

Basically, MeetingBurner lets a host show off a presentation to up to 100 people. Participants access the meeting through any web browser by clicking a link and then calling in with a physical line or using Skype. Participants also have the option to simply listen rather than call in. During the presentation, the host can record a meeting and afterward easily share it on Facebook, Twitter, LinkedIn, and YouTube.

“We’ve used lots of meeting solutions for our own businesses and we really thought we could do it better,” Rydell said. “We built the entire thing on the Amazon cloud, which gives it more speed and more flexibility than other providers offer.”

During the public beta, MeetingBurner will let anyone host up to 100 participants in a meeting. Rydell claims MeetingBurner could theoretically host up to 10,000 people in a single meeting because the service is built on Amazon’s Web Service cloud. The company has tested it successfully with 250 users in a real business meeting and 1,000 users in a simulation. The current 100 user limit is less than AnyMeeting’s 200 users, on par with Adobe Connect’s 100, and bests WebEx’s 25 user limit and GoToMeeting’s 15 users.

But, maybe most importantly, Connect, WebEx, and GoToMeeting cost $49 to $55 per month to run. Ideally, Rydell says he would like to offer a level of service that exceeds all competitors and still keep the price lower.

One area MeetingBurner is lacking in is live video. Both WebEx and GoToMeeting both feature the ability for several users at once to be featured on video. Other companies such as Vidyo play in the group video meeting market. MeetingBurner only lets the host of the meeting be featured in a tab with a live video stream.

“Based on our research, most businesses prefer having the host on video while others listen in,” Rydell said.

MeetingBurner’s free level of service most closely resembles AnyMeeting, which bests the MeetingBurner by offering 200 concurrent participants in a meeting. But MeetingBurner says it distinguishes itself from AnyMeeting because it does not feature advertising next to the presentation.

“Let’s say you’re a Ford salesman trying to give a presentation to potential customers and a contextual ad for a Toyota car shows up,” Rydell said. “That would be a serious problem. Anyone who gives a presentation with ads floating alongside isn’t going to be taken very seriously.”

When it comes to MeetingBurner’s premium level of service, Rydell did not share too much outside of two points. First, MeetingBurner will offer a higher meeting user count at higher prices. Rydell said if a client comes in and wants the pay for the ability to host a massively sized meeting, he would welcome it. 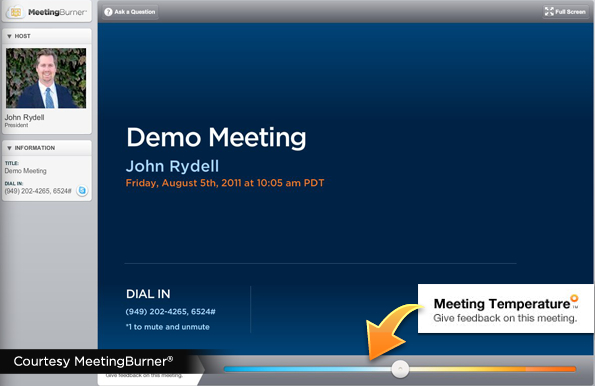 The second premium aspect is meeting analytics, with the ability to let participants identify how interested they are in a slide or topic. It’s called Meeting Temperature (seen above) and users can slide a bar to hot, medium, or cold. After the meeting, the host has a dashboard full of indicators to tell him or her which slides worked best and more.

Pricing for the premium level of MeetingBurner service has not yet been determined, but Rydell says the plan is to offer the service at a lower price than its competitors.

VentureBeat readers that would like to take part in the public beta can use this code to get access: “MBVB”.

A brief demo of the service can be viewed below: