With the proliferation of Internet television and other places for video, MeeVee, a Burlingame start-up, says it wants to use its “neutral” player status to sort through the clutter, and today releases new features to help.

MeeVee has competitors, including TV Guide, and Zap2it.com, which like MeeVee let you search and organize favorites. These are owned by big media players, and MeeVee is betting these others are too slow and their services too static. MeeVee, for example, focuses on ways to “push” your favorite content to you when it shows up.

Here are some of MeeVee’s new features, released today:

1) A “my interests” module (see left hand side of image below). You can search for shows, actors, or other keywords in a search box, and Meevee will tell you when those TV or Internet shows or actors are playing. You can place these favorites as “hearts” into your profile. If you like “Monk” for example, Meevee highlights it in your schedule for Fridays at 9pm, telling you the TV channel. If Monk subsequently shows up as an iTunes download, MeeVee will let you know. Same thing for favorite actors, or subjects (“biking,” for example) who appear in shows. MeeVee will let you know.

2) A new personal MeeVee widget for your Myspace, Facebook, Friendster profile or personal blog. You can broadcast to your friends what you’re watching. If someone clicks on the widget, they get a prompt to sign up to MeeVee too. Here’s an example. 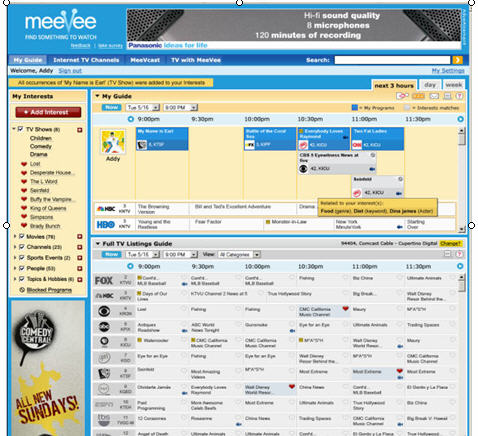 MeeVee is cutting deals with studios and other publishers, such as Fox, to allow for show previews, including full downloads in some cases. MeeVee, fresh with $8M in venture capital, wants to make money by placing relevant ads by show listings (an ad for the PGA, for example, by golf show listings; or a Netflix ad by a listing for The Cosby Show)