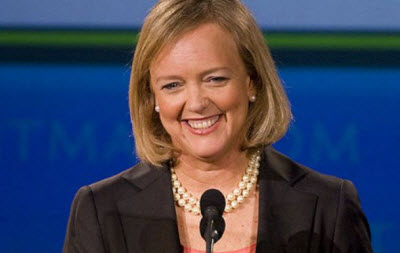 Hewlett-Packard will get “back to business fundamentals” in 2012, said Meg Whitman, the newly appointed chief executive of the world’s largest technology company, in a conference call with analysts today.

Whitman’s words will be closely scrutinized on Wall Street, since HP is seen as a bellwether for the overall tech economy.

At the same time, Whitman warned that the macroeconomic problems of the world economy and flooding in Thailand make the company cautious about its outlook in 2012. HP’s forecast for earnings in its fiscal year ending Oct. 31, 2012, are at $4 a share, far more pessimistic than the $4.56 a share that analysts expected. HP did not share revenue forecasts for 2012, as it previously did.

“Frankly many of the FY11 headwinds are still with us,” Whitman said.

Whitman was optimistic about HP’s future, but she acknowledged the issues that cost the job of her predecessor, Leo Apotheker, who was fired in September. She said she had spent time with employees, customers, partners, and the management team in the past couple of months and is impressed that HP has huge scale and is No. 1 or No. 2 in most of its markets. She said the company delivered on its fourth-fiscal quarter outlook with strong results, and made its decision to keep its PC division, the Personal Systems Givision (PSG).

“There is no question that HP and PSG are better together,” she said.

She added, “I also know we didn’t live up to our expectations in 2011.” She said that HP previously confused its customers and partners about what it would be — Apotheker’s moves were interpreted as HP’s plan to turn itself into a software-only company.  She said HP was in software to help its customers transform their businesses, but not to “change HP into a software company.” She said HP had not done a good job of leveraging “its whole as more than the sum of its parts” and it needs to deliver consistent results.

“No more surprises,” she said. “We need to articulate a clear direction.”

Whitman said that HP will rebuild its balance sheet after the $10 billion Autonomy acquisition earlier this year and won’t be doing any large mergers and acquisitions in the near future. HP saw weakness in consumer demand in desktop PCs and notebook computers.

“We have some of the best franchises in technology, customers who want to do business with us,” Whitman said.

Whitman said that research and development spending was up in the past fiscal year, as HP had under-invested previously, and it would increase again in 2012. In particular, added R&D is limiting profits in HP’s services division.

Cathie Lesjak, chief financial officer, said that HP’s Itanium system sales had been hurt in the quarter because of Oracle’s attempt to undermine it with negative comments and a withdrawal of its contractually required support. Lesjak said that HP had begun to see a slowdown in commercial spending as a result of the financial uncertainty in Europe. She also expects a shortage of hard disk drives because of the flooding in Thailand.