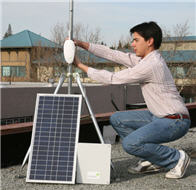 Meraki, the Google Mafia-run company which builds WiFi repeaters that lets residents surf the Web for free, now says it aims to spread its WiFi network across the entire city of San Francisco.

The company’s offering has proven popular in testing, with more than 40,000 people using Meraki’s WiFi connections in its initial two-square mile pilot test in San Francisco. People learn about the service through word of mouth, or by seeing Meraki’s “Free the Net” network name when they scan available wireless networks for their computer use.

While popular thus far, the company has a ways to go. People are using the WiFi network mainly for free, and so the company has yet to make money. Meraki provides the WiFi repeaters for free, which makes the service possible. People can access the service without owning a repeater. Sanjit Biswas, CEO and co-founder of Meraki, said the company doesn’t plan to make money from selling the repeaters. Rather, it is trying to showcase its technology in San Francisco — so that it can provide its WiFi systems to developing countries such as Brazil or India. That’s how it plans to make money.

It has also just raised $20 million more in financing to help it. The second round of funding comes from DAG Ventures, which led the round, and existing investors Sequoia Capital and Northgate Capital.

The company has an intriguing back-end. It uses solar-powered panels on rooftops to provide power for the operation (see image at top; Meraki employee John Tso installs a panel on rooftop). In San Francisco, the company’s network overcame “thousands” of cases of interference, it said, allowing Meraki to deliver almost 1Mbps of access to each user.

It’s testing an ad-supported model, too, so that it can sell wireless operators on the idea.

The company expects to have every SF neighborhood up and running by mid-year.