Following its foray into mobile payments, and details of its music-streaming plans emerging, popular messaging app Line has now launched an Uber-style taxi service in Tokyo.

While the Japan-based company revealed its plans to enter the lucrative taxi space a few months back, today sees the company officially unveil the service. Rather than launching a new standalone service, however, Line is bundling the feature into its main messaging app, enabling cashless payments for travelers via its recently launched Line Pay platform. 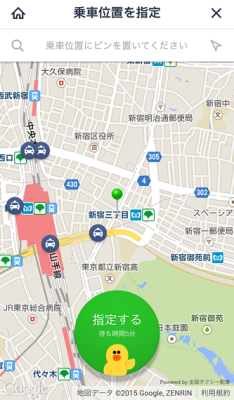 For launch, Line Taxi will only be available in the Tokyo metropolitan area, though it will be rolling out across Japan shortly.

Line has partnered with local taxi giant Nihon Kotsu for the launch, with almost 3,500 cabs available in Tokyo for the initial rollout, while more than 20,000 will be available for when the full countrywide introduction comes to fruition.

As with other similar apps such as Uber and Hailo, users can hail a taxi using the GPS on their phones, with specific building/flat numbers input manually where needed.

This is a notable launch for Line and pits the company against Uber, which launched in the Japanese capital last March, with competitor Hailo only plying its trade in distant Osaka.

Line may have risen to prominence as a WhatsApp-style messaging app back in 2011, but it has been building out its arsenal of offerings over the past few years.

With 170 million monthly active users (MAU) in more than 200 countries for its messaging app, and millions more across its various games and camera apps, Line has emerged as something of a tech titan. It has also forged a lucrative business from selling digital content, garnering $10 million in a single month from stickers alone.

But with the launch of Line Taxi, the company’s broader vision is becoming clearer, especially when put in context with the mobile payments service it launched last month.

Indeed, users can connect their Line accounts with a credit card to make digital payments anywhere, directly from their phones. While it’s limited to a handful of affiliated services and shops at first, the longer term vision is for Line Pay to become widely used across the offline and online commerce realm.

For now though, Line will continue to add its own services to the mix, and with Line Taxi the company retains significant control of the entire booking process, from payments through to service delivery. It’s all about removing friction and smoothing the path from a user’s wallet to its own coffers. It’s a pretty good business model, one that other Internet heavyweights such as Google and Amazon have been pursuing for a while.

Just before Christmas, Line also revealed plans to acquire MixRadio, a music streaming service that Microsoft bought as part of its Nokia Devices and Services acquisition, which will represent part of the music-streaming company Line founded with record labels. The company also has plans to enter the food-delivery space, providing yet another revenue stream, and it expects to further broaden its Line Pay service.