Metro: Exodus is coming in February 2019, but Microsoft showed a glimpse of the game today at its Xbox press briefing ahead of the 2018 Electronic Entertainment Expo (E3).

The trailer showed a train, the Aurora, as it escapes the underground of Moscow and moves into the snow-covered east. The game is the third installment in the Metro series from 4A Games, which is set after a nuclear war takes place in 2013. By 2033, the world is a wasteland, full of mutants and monsters, as well as unfriendly humans.

There’s a lot of action in the Metro: Exodus trailer, including shooting at monsters and “humanimals,” or zombie-like former human creatures. There are flying mutants as well as a giant shark-like creature that tries to swallow your row boats.

And toward the end of the demo, you can see how modular your weapons are, and how you can craft them to suit your purposes. The world of Metro: Exodus will no doubt have scarce ammo, but you’re clearly going to have to use a lot of it just to take down a creature with your machine gun.

The game will run on multiple platforms when it debuts next year. It’s a vicious wasteland, I’m afraid, where you play as Artyom, the hero of the Metro: 2033 and Metro: Last Light games. But Metro: Exodus will clearly be taking place in the outdoors, with swamps, churches, and other industrial wastelands in the environment. But that may not make it any easier for you to survive. 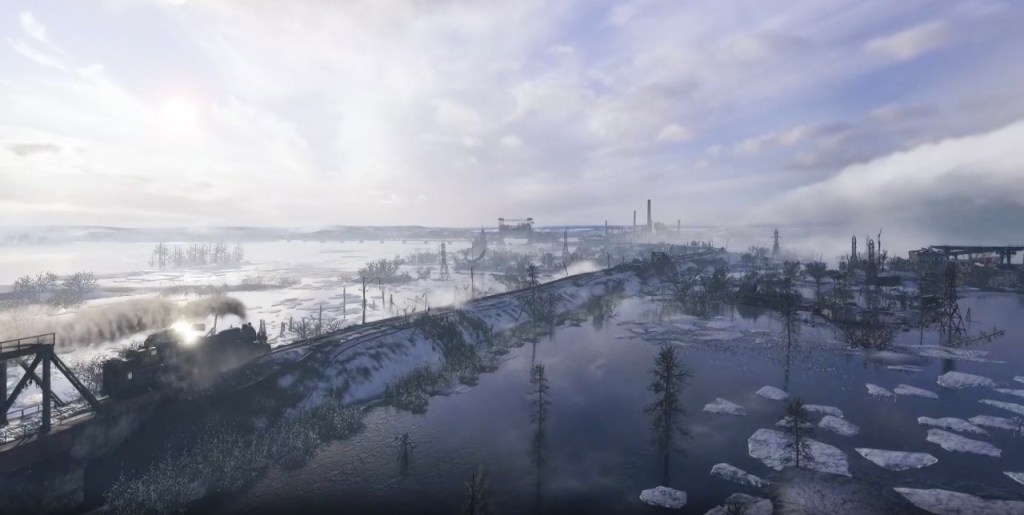 The Volga region of Russia encompasses the drainage basin of Europe’s largest river and is packed with dangerous bandits, a fanatic religious cult, and a range of vicious mutants desperate to make Artyom their next meal, 4A Games said.

The developers at 4A Games have re-imagined the landscape of the eastern European plains in detail, including the flooded remains of villages and factories where life was forever changed 25 years previously.

“4A are extremely proud to be showing 4K gameplay of one of our vast open levels exclusively on the world’s biggest videogames stage,” said Andriy Prokhorov, creative director at 4A Games, in a statement. “We can’t wait to reveal more of Artyom’s journey in the coming months.”