In its quest to make the “best remake ever,” developer 4A Games had to overcome an unusual obstacle: social revolution.

Based in Kiev, the capital of the Ukraine, 4A’s office is only six metro stops away from the center of the city, which transformed into a battleground last year amid violent clashes between protesters and the Ukrainian police. According to Huw Beynon, a longtime representative for the company, the developers would go out and join the protests every day after work. It wasn’t until “the bullets started flying” when Beynon “begged them to keep their heads down.”

Eerily, the situation in Kiev began to resemble the dreary world of 4A’s Metro games, first-person shooters that take place in a postapocalyptic version of Moscow — the nation that recently took territory away from the Ukraine and still may have troops in its country. I met with Beynon at a recent press event for Metro Redux (out for PlayStation 4, Xbox One, and PC this summer), a complete overhaul of the original Metro 2033 game with current-gen graphics and features, to find out more about 4A’s precarious situation.

“It has calmed down a lot,” Beynon told GamesBeat. “In Kiev, the real flash point was just before Christmas, where everyone was protesting initially, and then the situation got quite dark and erupted into some days of violence. And then [former Ukrainian president] Viktor Yanukovych left and the new government came in, and I think a lot of people there thought that the worst was over. And now there’s obviously a very different situation developing, which is quite scary, but maybe doesn’t have as much of an immediate impact on Kiev as that particular time frame, when everyone was out on the streets. …

“I don’t really want to get more drawn into it now. Who knows how it’s gonna end up there? All I know is that those guys were already under circumstances that are probably completely alien to most Western developers. And to have a situation where your country is potentially plunging into some kind of popular revolution or massive social upheaval, I mean … you just don’t have to deal with that over here.” 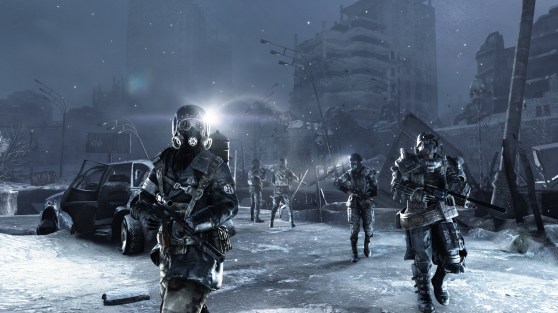 While Beynon doesn’t visit 4A Games that often — when he’s not talking to media about the Metro series, he’s a global brand manager at Deep Silver — he did travel to Kiev last year with other employees of the publisher to smuggle PlayStation 4 development kits into the country.

“This was before any of the stuff had really kicked off,” he said. “It’s quite a scary moment. I don’t know if you’ve seen a PS4 dev kit rather than the test kit: The test kits just look like normal retail things. The dev kits are beastful [sic] pieces. They look like this kind of retro, futuristic 1980s sci-fi — they’re astonishing. But they don’t look like anything else on the planet. And so you have to take them in your hand baggage, and you get some funny looks from customs on the London side when they’re going through the scanner. They’re not entirely sure what that is.

“And then you’re really sweating when you get to the other side, because if you get stopped and they say ‘Let’s have a look in there,’ and they don’t know what it is, you’re not entirely sure what’s going to happen. But we got those ones in safely. And then everything kicked off. Our producer, who’s there, and the CEO — Dean Sharpe, who’s been working with the team pretty much since the S.T.A.L.K.E.R days back when they were [GSC Game World], he came back to Deep Silver’s offices in Munich and left with two bags full of Xbox One kits.”

While 4A Games’s production team has been working on Metro Redux for a year, it only had the console kits — the two PS4 units from last October and three Xbox One kits from this past January — for a few months now, making it even more remarkable that they were able to stay on track for Redux’s summer release. 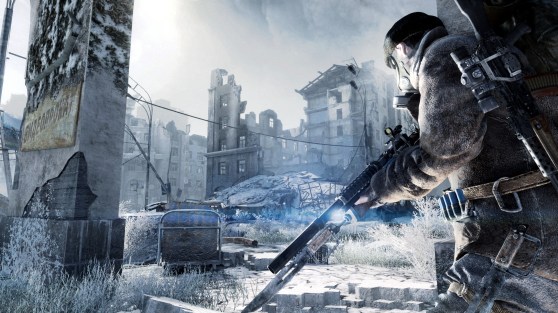 Above: You can play Redux using its original survival-horror difficulty or with the more action-oriented settings from Last Light.

For now, the developer isn’t in any immediate danger. Beynon assured me that the studio is “safe and sound.”

“If that changes and there’s a problem, we would let people know. … They’re looking after themselves,” he said.

Shortly after our conversation, 4A Games announced that it was establishing a new studio in the Mediterranean island country of Malta, which will also serve as its new headquarters. The Kiev office will still remain open, but “key members” of its current team, including creative director and 4A cofounder Andrew Prokhorov, will move to Malta.