John Underkoffler was the science advisor behind the gesture-controlled computer in the film Minority Report, and he spent a lot of time trying to realize the user interface in the real world so that enterprises can collaborate more easily.

Today, Underkoffler’s Oblong Industries is introducing Mezzanine Teamwork, a gesture-controlled interface for running meetings in small spaces. Oblong believes the interactive spatial operating environment can give enterprises a competitive advantage in a fast-paced business. The interactive platform is a little like science fiction from not so many years ago.

Please check out our GamesBeat Summit 2017 event taking place from May 1 to 2 on the inspiration between science fiction, tech, and games. Use Deantak code for 20 percent off. Oblong’s Underkoffler will speak on next-generation user interfaces.

Enabling collaboration in “huddle spaces and compact meeting room environments,” Mezzanine Teamwork has a dual-screen configuration that the company says makes efficient use of wall space but sacrifices none of the features of Mezzanine for larger enterprises.

Mezzanine Teamwork is designed to spur productivity by maintaining creative momentum and allowing rapid, natural transitions between these collaborative phases. The idea is that new ideas flow more easily because Mezzanine is enabling teams to create and share in parallel, from any application, and from any location. 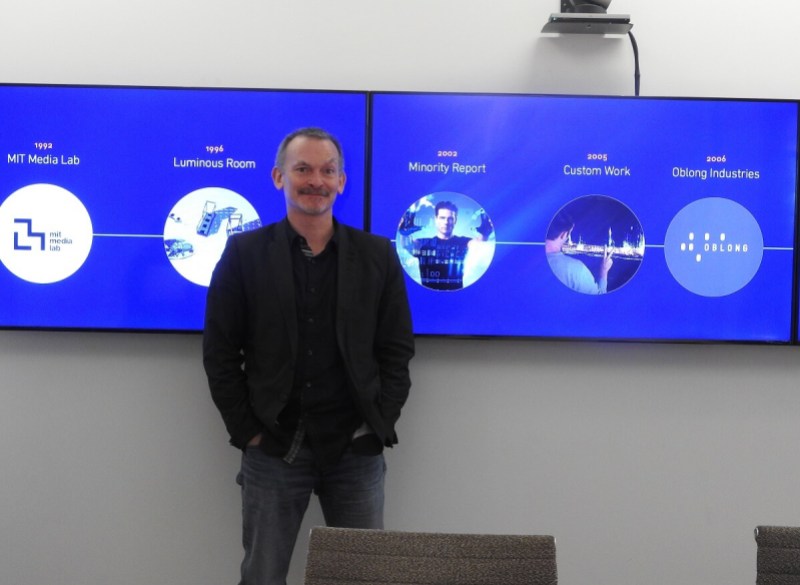 “At last, teams around the globe, in workspaces and meetings rooms of all sizes, will have access to true collaboration,” said Underkoffler, CEO of Oblong, in a statement. “That means contributing interactively and in real time to a shared visual context — and a team that literally sees the same thing in the same way is ideally equipped to produce great content and make smart decisions.”

Research shows that in the heat of creativity, momentum matters. Collaborators lose the thread if they have to take turns or wait. Just one second’s pause interrupts the flow of thought; after 10 seconds people tend to disengage from an ongoing dialogue. Remote teams are more likely to suffer such disengagement, which in turn drops innovative behavior by 93 percent and performance by 50 percent.

Mezzanine Teamwork says its product transforms meetings and workflows into fluid, immersive experiences with content and control equally accessible to everyone — an experience called Infopresence. Teams can stay in the flow start to finish, using wands or their personal devices to accentuate, order, and winnow possibilities to accelerate the process of coming to a decision.

“We’re thrilled to launch a new member of the Mezzanine family and open a crucial new market,” Underkoffler said. “Mezzanine Teamwork is one more way we enable people throughout an organization to be as creative, collaborative, and productive in the workplace as success in the twenty-first century requires.”

Oblong’s customers include NASA, PwC, IBM, Fujitsu, and Accenture, along with other global innovators and forward-thinking brands. Mezzanine has 18 offices around the world.

Oblong commissioned a study conducted by Forrester Consulting in March 2017. That study showed Mezzanine pays for itself in 7.6 months and has a 226 percent return on investment (ROI).