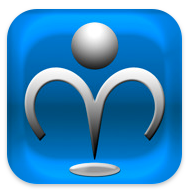 Micello, an ambitious startup trying to map the world’s indoors and create location-based services around them, is leading the pack of companies mapping the buildings where we spend our time, banking on the fact that getting where you’re going is only half the battle.

Micello’s also promoting itself for Valentine’s Day, providing a way to get to the mall, and search for stores that have chocolates, flowers, or gifts for your loved ones. During a shopping frenzy, Micello is trying to show where it fits in as a location-based service.

Right now, GPS technology is quite good. If I need to get to the nearest Walmart, a few clicks and Google or Bing can take me straight there. Using services like Foursquare, I can even find out what’s near Walmart—if there’s a coffee shop, or if any of my friends are nearby. But if I’m at Walmart, what if all I want to know is where, inside the mega-store, are the socks? We need a way to find our way, not through streets and roads, but through stores and hallways. 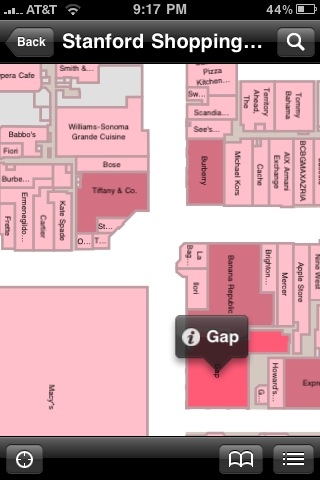 Micello’s niche is just that: “a Google Maps for the indoors,” as they put it during their launch. Google Maps works best outside, using corners and addresses to get you where you’re going. When you’re not on the street corner, it’s hard to find out what’s nearby and how to get there. That’s what Micello is after. They’re content to let you get to where you’re going using some other service, but they want to show you what’s going on where you are. If I’m in an airport, Micello’s goal is to show me how to get to the parking garage, what restaurants are nearby, and how to navigate my way to the gate.

At the moment, Micello is only available for the iPhone and iPod Touch (iTunes link), but the company plans to extend it to other phones, as well as a Facebook application. The focus is on a mobile connection, but maps can be cached and viewed offline.

All the Micello maps can be layered on top of Google Maps, which means you can use Micello to navigate your way to wherever you’re going within the building. Instead of simply creating a personally-tailored map that only cares about your immediate surroundings, Micello’s maps can also be scaled upward, showing the broader world around where you are thanks to their integration with Google Maps.

Micello’s founder, Anil Agarwal, sees limitless potential in this kind of data. Everything from conference schedules with maps included, he says, to navigation, social information and flight times can be made more useful with these indoor maps.

There’s also great social potential with indoor maps, in much the same vein as outdoor maps: if you’re at a conference, or at the mall, you want to know what’s going on, who’s having sales, and where people are. If Micello can use its maps to help people congregate, whether in an airport or a hotel, it’s got great promise.

The challenge Micello, and others like Point Inside, are facing is that mapping the indoors is incredibly hard, and hasn’t really been done before. Micello claims they’ve got it figured out, though, and are able to add new maps every day—the app launched with 300 locations mapped, but the numbers appear to be growing fast.

The other problem with Micello and others is that they’re just one more application to use. You use Google Maps to get where you’re going, Foursquare to find out what’s nearby, Yelp to see if it’s any good, and then Micello once you’re inside. Ideally, an application would flow seamlessly through all these steps, without making you launch and load a new app. It seems likely that something to that effect will happen, but how that goes remains to be seen.

Micello, which launched at the DEMO conference (co-produced by VentureBeat) in 2009, is based in Sunnyvale, Calif.