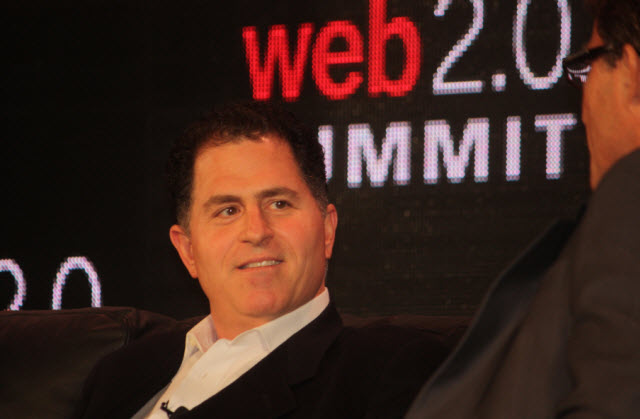 Michael Dell, founder and chief executive of Dell, said that the recent uncertainty at Hewlett-Packard has been good for Dell in landing new customers. HP is the world’s No. 1 PC maker, but its place in the market became uncertain when the previous CEO, Leo Apotheker, announced he would study whether to spin off the PC division. Since enterprise customers hate uncertainty, Dell said his list of new customers has been growing.

“It’s a great opportunity for us to describe our commitment to what we do,” Dell said, speaking at the Web 2.0 Summit in San Francisco. “We tell customers we are investing in our business and we are seeing significant opportunities because of the confusion there.

The company is reporting record profits and growing fast in the consumer and enterprise markets. Dell said the company has successfully gotten past one of its major growing pains, which was transitioning from a provider of boxes to a provider of software, services and solutions that helped customers solve problems. Services are now 40 percent of the company’s revenues. Services and software have been the focus of the company’s nine acquisitions in the past 12 months, Dell said.

“Customers would say to us, ‘I really don’t care about your shiny new server,'” Dell said. “They said, ‘What do you know about my business?'”

While Dell is known for its TV advertising (including its long-departed Dell Dude), enterprise is still the big business at Dell. The company is the top provider of hospital systems, with services that include a cloud archive for medical images with 4.5 billion images stored in it.

While HP is still considering what to do with its PC business, Dell said that his company is definitely keeping its PC business. The company is focused on managing millions, or possibly billions, of devices in the market. While the business of selling those PCs isn’t extremely high-margin, the management of devices is a business with better margins. He noted that Facebook was one of Dell’s customers, but I asked him about how big data center owners are bypassing companies like Dell and going direct to Taiwan to build their own servers, cutting out the margin that would go to Dell.

“We have sold 15 million servers and they are dispersed all over the enterprises,” Dell said. “There will be shifts in how large customers buy them. Some of what you said is absolutely going on. We still see servers as a strong growth market. Our focus is on innovation in the next-generation data center with storage or … making super highly efficient data centers for companies of all sizes.”

Asked about tablets, Dell said, “If you look at the tablet  market now, you’d have to say it is an iPad market. Android has not done well. Microsoft has a pretty good shot with Windows 8.”

He said Microsoft has a good pitch with continuity of apps across tablets, PCs, phones and hybrid devices.

Dell said that he blogs and tweets on social media because it was ingrained in him at an early age. At 14, he got his first Apple II computer and one of the first things he did was set up a bulletin board system.

Dell said that would-be entrepreneurs should be willing to fail, go big, and get scale. He said his own business hit a wall when it went from $800 million in revenue to $2 billion in one year. But his company had to make it. 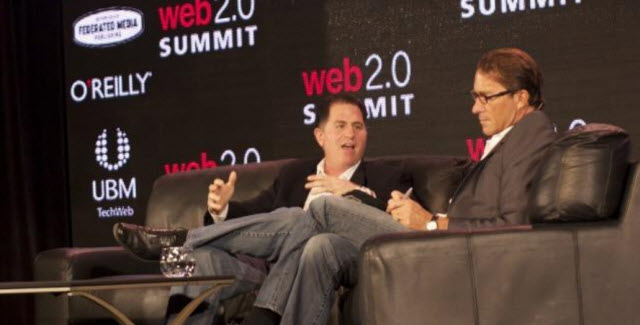