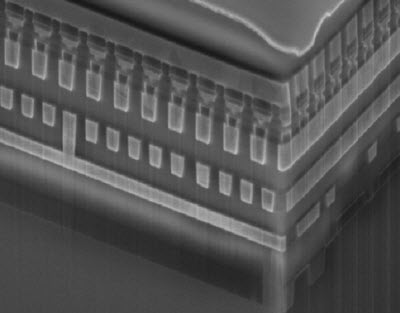 Micron Technology announced today it is buying Numonyx in an all-stock transaction valued at $1.27 billion.

Boise, Idaho,-based Micron is the largest U.S. maker of main memory chips used in PCs and other electronics. Numonyx, meanwhile, is a flash memory chip maker that has been working on a universal memory chip — which combines the best features of multiple types of memory chips.

Numonyx was formed in 2007 through the combination of the flash memory businesses of Intel and ST Microelectronics.

Back in December, Intel and Numonyx announced they had accomplished a breakthrough in a new kind of memory chip dubbed “phase change memory.”

They showed a prototype of a 64-megabit phase change chip that can be stacked three dimensionally on the same chip. That means the chip has multiple layers of memory cells, allowing it to be densely packed with storage cells. It can also be used for both random access (DRAM) functions and non-volatile memory (like Flash, where the memory is retained even without power). And it doesn’t consume a lot of power. The initial chip has just one layer, but future chips are expected to be stackable.

This new prototype chip, called a PCMS for phase change memory and switch, has a storage cell layered with what Numonyx calls an Ovonic Threshold Switch, which allows the cells to be stacked vertically yet accessed easily. The prototype uses a material that is an electrically-charged form of glass. This same kind of material is used in CD-ROM drives and non-volatile memory today. At the time Intel and Numonyx said they could not predict when they could commercialize the chips. But apparently Micron is confident they can do so.

There are other kinds of new memory technologies under research. One of them, magnetic random access memory, is in production now, but it isn’t a stackable memory.

[Note: story updated, now that I figured out which company this was.]