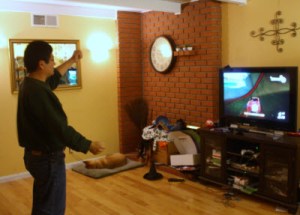 Cisco’s Umi teleconferencing camera for home living room use and the Microsoft Kinect motion controller have more in common than you might think.

That’s because Microsoft is making a play at bringing video conferencing to the living room — and taking on video conferencing titan Cisco — as part of its media package with the newest addition to its Xbox 360 video game console, the Kinect (pictured at left in use by VentureBeat’s Dean Takahashi).

The Kinect controller features a camera and a microphone array that can detect what someone is saying from pretty much anywhere in the room. The controller allows XBox 360 users to control the console with their voice alone. For example, they can say “Xbox ESPN” to bring up the ESPN channel on their Xbox 360 dashboard.

About 40 percent of all time spent using the Xbox 360 is spent doing activities outside of video games, said Dennis Durkin, chief operating officer of Microsoft. That can range from watching Netflix, to accessing Facebook, to using the Kinect controller to chat with friends through Xbox Live. Microsoft’s goal with Kinect is to turn the entire Xbox 360 experience — not just the video games — into a social experience, Durkin said. He made the comments at the 18th annual Digital Entertainment conference hosted by BMO Capital Markets today.

The Kinect device allows Xbox 360 owners to start video chats with other Kinect users, as well as voice chats with Windows Live users. Cisco’s Umi telepresence, in comparison, can make calls to other Umi users as well as any other computer with a webcam. Umi also has a few other bells and whistles, such as the ability to leave voicemail messages and greetings. The camera is also more powerful, and lets users stream their video conferences at higher resolutions.

Cisco has been a huge name in enterprise video-conferencing technology and has also won itself a presence in the home networking market with its wireless routers, a market it entered by acquiring Linksys in 2003 and expanded by acquiring set-top maker Scientific Atlanta in 2005. The enterprise giant’s push into the consumer space just goes to show how large the consumer market is.

But Kinect, which launched last week, has the jump on Umi. Cisco’s home teleconferencing device launches next week at Best Buy stores and costs a whopping $600. Umi users also have to pay an additional $25 a month to use the teleconferencing service. Kinect costs only $150 and already ties into the Xbox Live service. Microsoft is making one thing clear — there’s only room for one ominous-looking camera device on top of living room televisions.