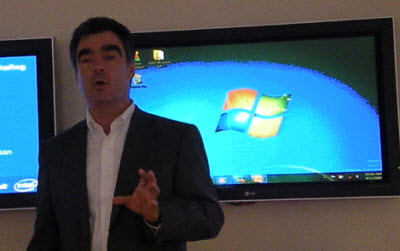 Microsoft and Intel have been collaborating for decades, but for the launch of Microsoft’s Windows 7 operating system, they say that they have collaborated more closely than ever before. The result is improvements such as the ability to boot the operating system within 11 seconds.

Imagine that. Wintel really acts like Wintel, rather warring partners, sometimes. The collaboration was in the name of making Windows 7 better and more bug-free than the January 2007 launch of Windows Vista, which has been broadly criticized in the industry as one of the best advertisements for buying a Mac in history.

Intel engineers on site at Microsoft’s headquarters in Redmond, Wash., have worked together for the past couple of years to make sure that Windows 7, which launches worldwide on Oct. 22, will work well with Intel’s chips, said Stephen Smith, (above) an Intel vice president and general manager of Intel’s digital enterprise division.

The teams worked together to get better energy efficiency, security performance, better virtualization, and performance/responsiveness. The companies touted the collaboration today at a press event in San Francisco where they showed demos of Windows 7 running on current and upcoming Intel chips. The collaboration resulted in changes to both Intel’s chips and Microsoft’s software to optimize the results, said Mike Anguilo, general manager of Windows planning for the PC ecosystem at Microsoft.

As an example, Windows 7 takes advantage of Intel’s latest Nehalem family of chips that have multiple cores, or computing brains, on a single chip. The operating system can figure out how to spread its program tasks across the cores in the most efficient way with respect to energy usage and performance. If one core is idle, the operating system will assign more work to the idle core. If there is no extra work, the system will shut the core down and save energy.

Windows 7 can play a DVD movie on a Lenovo T400 laptop and use only 15.6 watts of power. The same DVD movie running on the same laptop with Windows Vista on it consumers 20.5 watts. The reason for the difference is due to techniques such as “timer coalescing.” A lot of programs run on timers where they wake up an idle core — in a reduced energy state known as deep sleep — just for a single task, such as to check to see if other Bluetooth devices are in range. The timer coalescing techinque will let the idle core sleep as long as possible, wake it up to do a bunch of tasks in a batch, and then put the core back to sleep.

As mentioned, Intel and Microsoft showed that a vanilla version of Windows 7 can boot in just 11 seconds, particularly if it’s running on a four-core Intel processor that can do eight tasks at the same time, thanks to an Intel technology dubbed hyperthreading.

The new operating system also has built-in features that take advantage of specific hardware components on Intel chips, such as encryption processing and virtualization. Intel’s upcoming 32-nanometer Westmere platform, which combines a processor and graphics chip in the same subassembly, can run the Windows 7 hardware encryption much faster than other Intel platforms. The Westmere platform, which includes a microprocessor code-named Clarkdale, can run 256-bit encryption algorithms 10 times faster by tapping special hardware in the chip.

Smith at Intel said that Intel’s basic chipsets, which include graphics hardware, will run games much better than past versions of Intel hardware. It remains to be seen if that is anywhere near good as machines with stand-alone graphics chips.