With the gathering we call Mobile World Congress expected to offer little in the way of big announcements and buzzworthy names this year, Microsoft CEO Satya Nadella arrived in Barcelona to fill the void.

On Sunday evening, Nadella opened a Microsoft event for journalists to introduce the second generation of the company’s HoloLens, an intriguing augmented reality headset Microsoft is still trying to push past the embryonic stage. It also unveiled what is arguably one of its most important hardware announcements in years, the Azure Kinect, a camera and sensor device that’s based on the technology of Microsoft’s old Kinect for Xbox but that targets businesses by giving them a gadget powered by artificial intelligence and cloud computing.

The Azure Kinect neatly encapsulates the direction Nadella is steering the business, in this case toward an emerging infrastructure trend known as “edge computing” that brings computing power closer to users rather than keeping it in a centralized cloud datacenter. This shift is part of a fundamental re-architecting of the internet. Still, it’s not the kind of thing that’s likely to set consumers’ hearts a-fluttering in the way insanely priced foldable smartphones might.

But Nadella’s presence on this international stage that still attracts more than 100,000 attendees allows him to reach an influential group and aim higher with his rhetoric, shooting above a sales pitch toward a loftier vision of where tech should be taking the world at a moment when the tech industry finds itself mostly the target of suspicion and fear. And so, trying to walk the line between touting his company as pushing boundaries and reassuring people that technology is not ushering in a terrifying dystopia, Nadella delivered a message of digital inclusion.

“The defining technologies of our time, whether it is AI, cloud, or mixed reality, cannot be the province of a few,” he said. “They must be democratized so that everyone can benefit.” 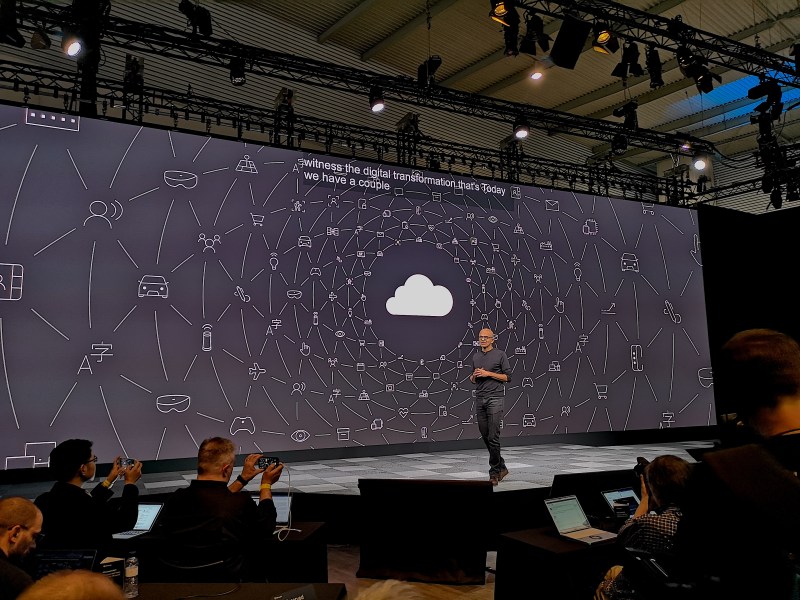 In past years, tech luminaries like Facebook CEO Mark Zuckerberg and Google CEO Sundar Pichai have taken prominent slots and offered brow-furrowing thoughts on tech trends and how their respective companies are working to reach a wide range of people and close the global digital divide. But with both their companies under fire, neither is showing up this year. On the corporate side, Samsung usually takes center stage on the Sunday evening before the show to launch its new flagship phone but this year opted to hold its own event earlier last week.

Instead, it’s Nadella who will be everywhere when the show officially starts on Monday. He’s joining Spanish telecom company Telefonica for a press conference to discuss a partnership that uses Microsoft’s cloud and AI service to create new customer services. Later, Nadella will participate in a keynote with Dieter Zetsche, chair of Daimler AG, to discuss a cloud computing partnership announced last week.

While Nadella may not be quite a household name yet, his appearance comes at an auspicious time, just a few months after Microsoft briefly became the world’s most valuable company again. It also follows several months of plaudits for the job he’s done helping Microsoft break from its past.

Given that his megaphone is perhaps bigger than ever, Nadella used his opening remarks on Sunday to highlight the wave of disruption that is about to wash over the world as billions more devices are connected, countless more terabytes of data are generated, and every industry gets turned upside down. However much people feel like their lives have been changed in the past 10 years by the age of the smartphone, it will be nothing compared to the disruption caused by the coming era of 5G networks and AI and the true internet of things (IoT).

“It’s really an awe-inspiring time to be in this industry and witness the rapid transformation taking place,” he said.

“Computing is embedded in our world,” he continued. “In every place and everything. Computing is becoming a part of every aspect of our work and daily lives … Computing is no longer confined to a single device or single datacenter.” 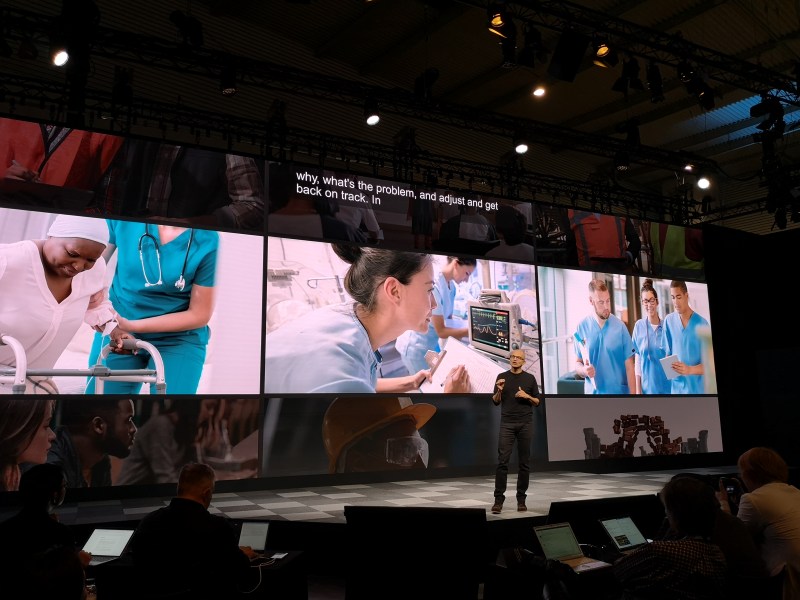 Of course, this is exactly what scares many people: that tech represents a Pandora’s Box we can no longer shut and seems to be eroding our economies and making people deeply unhappy.

“I’m cleared-eye about the unintended consequences of these advances,” he said. “That’s why we’re committed to earning our customers’ trust and instilling trust in technology across everything we do.”

That includes focusing on privacy, which he called a “human right,” investing in cybersecurity to protect people, and developing ethical AI.

“That’s why we build AI responsibly, and are taking a principled approach,” he said. “And asking the difficult questions, like asking not what computers can do, but what computers should do.”

From there, he tried to nudge attention to the more optimistic side of all these breakthroughs in fields such as machine reading, AI, robotics, and mixed reality. What if augmented reality can be used to train people for new jobs that normally would take years to learn? What if cameras and sensors in hospitals could help predict and prevent the 1 million falls that cause 11,000 fatalities every year?

“That’s what we’re building technology for, to give each of us superpowers. To enable more people to thrive and participate in our economy, and move us from being just consumers of technology to creators of technology.”