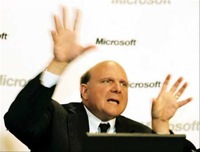 Microsoft chief executive Steve Ballmer seems to be backing away from his previously expressed optimism about the economy — he said today that the ongoing financial crisis will “certainly” affect Microsoft.

“Financial issues are going to affect both business spending and consumer spending, and particularly … spending by the financial services industry,” Ballmer said during a news conference in Oslo, Norway, adding, “Whatever happens economically will certainly effect itself on Microsoft.”

An admission that the economic slowdown could hurt Microsoft hardly counts as a revelation, but it’s significant that Ballmer is voicing those concerns in public. How significant? At least one trader blamed Ballmer’s remarks for the 3 percent drop in German software maker SAP’s stock, according to Reuters.

Ballmer’s new take on the economy is also interesting since it come less than a week after a Churchill Club discussion in which he emphasized the “buoyancy” of the market, and how “people I talk to are now relatively optimistic.”

Portfolio’s Kevin Maney may be overstating things when he says Ballmer “can’t decide what’s on his mind” — both discussions have more caveats and generalities than specific discussions of Microsoft’s future — but there does seem to be a real shift in emphasis. Last week, Ballmer said he had nothing interesting to say about Microsoft because he was nearing the end of the Sept. 30 quarter. So he didn’t comment on Microsoft’s outlook itself, focusing instead on the optimistic notion that the economy was buoyant because overseas markets and consumers were not directly affected by Wall Street’s troubles.

Now he isn’t talking about buoyancy or optimism and says instead that Microsoft will definitely be affected. (There’s also a risk that the emphasis comes more from the reporters covering the talks than from Ballmer.)

Of course, a stock market crumble in which major tech players like Google, Apple and Sun (but not Microsoft) hit one-year lows could shake anyone’s confidence and put to rest any remaining hopes that technology will be immune from the downturn. Now that Microsoft shares and the overall market both look like they’re starting to bounce back (the Dow Jones Industrial Average has risen more than 340 points so far today), Ballmer may flip his “optimism” switch back on.