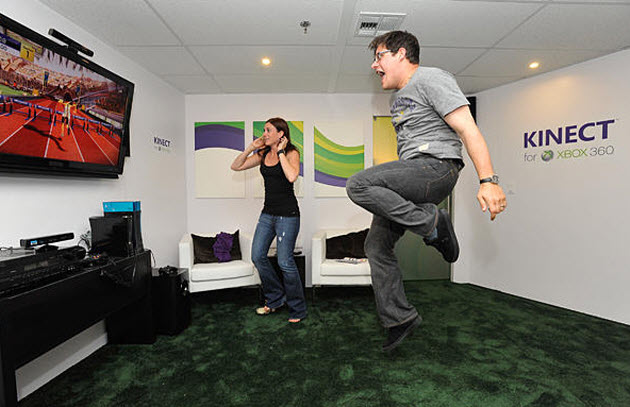 Microsoft showed developers today how they can exploit the Kinect motion sensor for applications that go beyond controlling video games for the Xbox 360.

The Kinect for Windows software development kit (SDK) will be released this spring when Microsoft Research and its game division finish work on it. The goal is to support a growing community of academic researchers and enthusiasts who want to take Kinect to the PC to launch creative new motion-sensing applications. If the SDK takes off, Microsoft can benefit from an experimental and innovative community growing up around the Kinect technology.

Microsoft announced the details of the SDK today at its Mix11 developer conference in Las Vegas. When Microsoft launched the Kinect system in November, it had no idea that users would want to come up with their own apps. But users quickly circumvented the Kinect’s security system and came up with a bunch of hacks to enable things like a Kinect piano and use Kinect to control a flying drone.

The SDK’s features include the ability to track body movements in a skeletal outline for one or two people moving within Kinect’s camera view. It also has advanced audio capabilities, allowing developers to take advantage of the four-microphone array with acoustic noise and echo cancellation for clear audio. It also has “beam formation” technology to identify a sound source and recognize what is being said. And it has an XYZ depth camera for detecting motion in a 3D space, measuring the distance of the object from the Kinect camera.