With Windows 10 launching on July 29, Microsoft today detailed how it will upgrade users to its latest and greatest. The company will do so in waves, which shouldn’t be a huge surprise — the goal is to hit 1 billion devices in “two to three years,” which naturally won’t be occurring all in one go.

“We want to make sure all of you have a great upgrade experience, so we’ll roll out Windows 10 in phases to help manage the demand,” Terry Myerson, Microsoft’s executive vice president of operating systems, explained. He also reiterated that the company will deliver Windows as a service, meaning ongoing improvements even after launch. “In this world, Windows 10 is continuously improved and keeps getting better and better — for our consumer and business customers.”

Microsoft says it has seen “millions of reservations” for Windows 10 — at the end of May, the company started prompting Windows 7 and Windows 8.1 to reserve their free Windows 10 upgrade. It also revealed there are now more than 5 million Windows Insiders testing the latest Windows 10 builds, up from the 3.9 million figure shared in mid-May.

Windows 10 will roll out to Windows Insiders on July 29, and then reserved systems will get notified in waves, slowly scaling up after July 29. “Each day of the roll-out, we will listen, learn, and update the experience for all Windows 10 users,” Myerson promised.

Those who have reserved Windows 10 will be notified once Microsoft’s compatibility system gives the green light. Machines not yet ready for the upgrade will be given special instructions, which may include contact information for following up directly with an application provider or device manufacturer. Most upgrade incompatibilities will still let you complete the upgrade and try to solve potential issues afterwards.

Most importantly, Microsoft said it is seeing “full compatibility today with the vast majority of Windows 8x and Windows 7x systems.” The company is working with its ecosystem partners to test millions of systems, working on device and application compatibility, which will be an ongoing process.

In this vein, Microsoft will soon give its OEM partners a Windows 10 build for imaging new devices. A Windows 10 build will then be distributed to retailers for the purpose of upgrading newly purchased devices that were originally imaged with Windows 8.1.

Here is the sticker for assurance that OEM partners will be able to put on older devices that have been tested for compatibility with Windows 10: 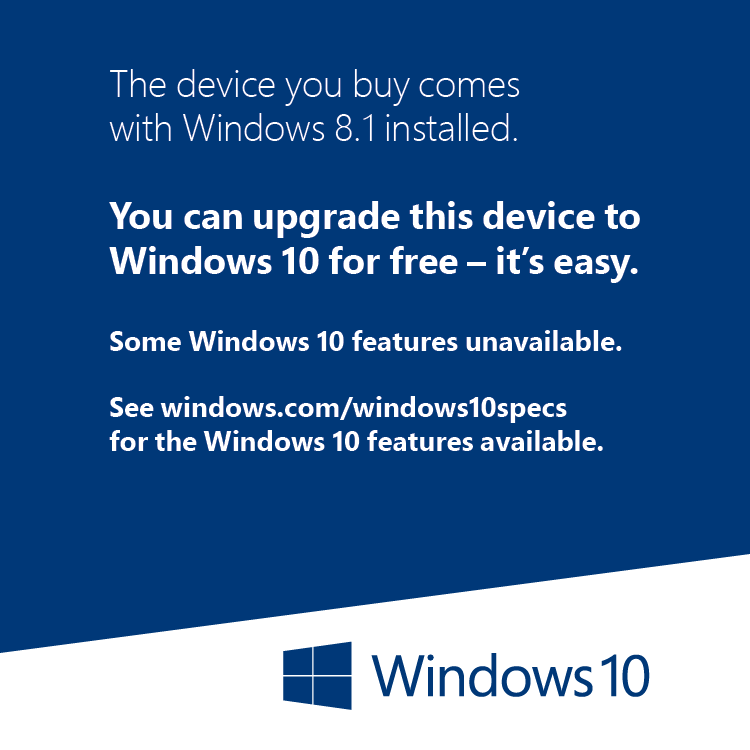 “Window 10 Pro, Windows 10 Enterprise, and Windows 10 Education offer a rich set of fundamentals that you would expect from Windows, and a range of security, deployment, and management features,” Myerson said. “Just like for our consumer customers, we’ll continue to introduce new features and updates in an ongoing manner, including Enterprise Data Protection later this year.”