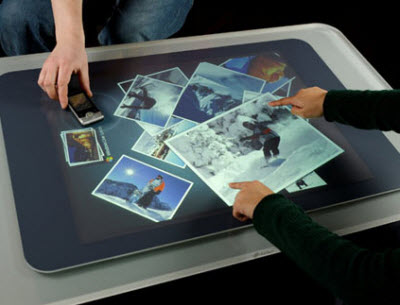 Microsoft has filed a patent application for a new kind of “tactile” touchscreen which allows you to feel an on-screen object when you touch it.

The display uses technical feedback technologies to make you feel the ridges, bumps and textures of a displayed image, like the one pictured, according to New Scientist. The idea is aimed at large table-sized computing displays such as Microsoft’s Surface technology, according to the patent application.

The Microsoft screen can reportedly produce a real texture, using pixel-sized memory plastic cells that can be ordered to protrude from the surface of the display upon demand.

Others working on this kind of technology include Nokia, Disney’s research arm in Pittsburgh, Penn., and Finnish firm Senseg. Those companies are working on “vibrotactile displays,” which use voltages of different frequencies, applied to a grid underneath the touchscreen, to trick your fingers into feeling a variety of touch sensations. The problem with those screens is that they can emit an audible buzz, New Scientist said.

Microsoft’s patent, published on Sunday, shows that the company uses a layer of shape-memory plastic placed above a large touchscreen. It distorts the surface when different wavelengths of ultraviolet light strike its pixels from beneath. The inventor is Erez Kikin-Gil. A projector within a Surface display can project an image onto a tabletop from below. As the user touches the images, the infrared technology detects the movements and triggers changes in the plastic sitting atop the display.