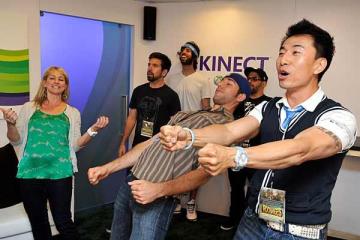 Microsoft will unveil three new games for its Kinect device tomorrow at the Electronic Entertainment Expo in Los Angeles — one of which will literally be a trip to Disneyland.

The game will let players take a virtual tour of a carbon copy of Disneyland, a popular theme park in California that features Disney characters like Mickey Mouse and Donald Duck. Microsoft has rebuilt the whole experience of visiting the Magic Kingdom piece for piece, except for one small difference — players can fly through Disneyland instead of walking.

Microsoft is pulling out all the stops to make sure the Kinect is as appealing as possible to just about every audience. The Wii was successful initially because it was able to hit both casual audiences with games like Wii Sports and hardcore audiences with games like The Legend of Zelda: Twilight Princess. Most games for the Kinect, like dancing game Dance Central, have been more appealing for casual gamers — but that’s poised to change at E3 this year with the presence of games like Child of Eden and the new Star Wars title.

The Disneyland adventure game looks like it will be less of a “game” and more of an “experience,” which is what Microsoft is trying to evoke by immersing gamers even further with motion-controlled gaming. The company has tried to market its Kinect motion controller as an experience by giving Xbox 360 owners ways to control other parts of their Xbox 360 with motion controls — like the menus in the console’s dashboard that let owners access popular applications like Hulu and Netflix.

The Xbox manufacturer is also targeting children with its Kinect motion controller by releasing a game that lets kids and their parents dive into the world of Sesame Street. Players can interact with characters in the Sesame Street universe, which is populated by puppets like Elmo and Cookie Monster — both of which are iconic images in children’s entertainment.