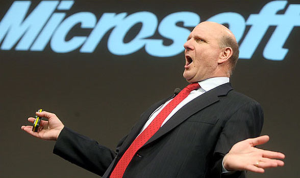 Microsoft has just posted record revenues of $17.37 billion for the most recent quarter.

Highlights of the quarter run the gamut from business products (the company’s productivity server offerings, including Lync, SharePoint, and Exchange, grew double digits, and its Dynamics business grew 17 percent) to consumer products (as expected, it was a good quarter for Xbox, Kinect and the Gears of War franchise).

Operating income was $7.2 billion; net income was $5.74 billion. Diluted earnings for shareholders were $0.68 per share, a 10 percent year-over-year increase.

“We saw customer demand across the breadth of our products, resulting in record first-quarter revenue and another quarter of solid EPS growth,” said Peter Klein, chief financial officer at Microsoft, in a statement. “Our product portfolio is performing well, and we’ve got an impressive pipeline of products and services that positions us well for future growth.”

And, according to a statement from Microsoft, “Xbox was the top-selling gaming console in the U.S. for the ninth consecutive month. The company launched the Gears of War 3 game [an Xbox exclusive title] with over three million copies sold in the first week.”

In fact, Xbox sales are going so well that one Microsoft rep told VentureBeat earlier this month, “Gears of War 3 has set the bar as the top game launch of the year, kicking off the biggest holiday in Xbox history with a bang. While we don’t share sales projections, we’re really happy with the results thus far and are kicking off what promises to be our biggest holiday yet in Xbox history.”

While the company hasn’t revealed any specifics about Windows Phone 7 or Bing earnings, it did say that the search engine… excuse us, decision engine, was rapidly gaining market share, growing 350 basis points year over year.

As for the mobile division, we’re still standing by our assertion that it might turn out to be a sleeper hit, but Microsoft isn’t trumpeting any big numbers just yet.

As some of you may recall, Microsoft purchased Skype for $8.5 billion earlier this year. The company will begin including Skype revenues in its earnings next quarter.

Stay tuned for more details from the company’s earnings call with shareholders after the closing bell.