Analysts had expected Microsoft to earn $27.9 billion in revenue and earnings per share of $0.96. The company thus easily beat expectations. The company’s stock was down 5.35 percent in regular trading, but up more than 3 percent in after-hours trading. Microsoft said it returned $6.1 billion to shareholders in the form of share repurchases and dividends during the quarter.

“We are off to a great start in fiscal 2019, a result of our innovation and the trust customers are placing in us to power their digital transformation,” Microsoft CEO Satya Nadella said in a statement. “We’re excited to help our customers build the digital capability they need to thrive and grow, with a business model that is fundamentally aligned to their success.”

What Nadella didn’t say is that this was a record Q1 quarter for the company. The consistent quarterly success can be attributed to his plan to turn Microsoft into a cloud company. Last year, Microsoft’s cloud annualized run rate passed $20 billion, ahead of schedule. 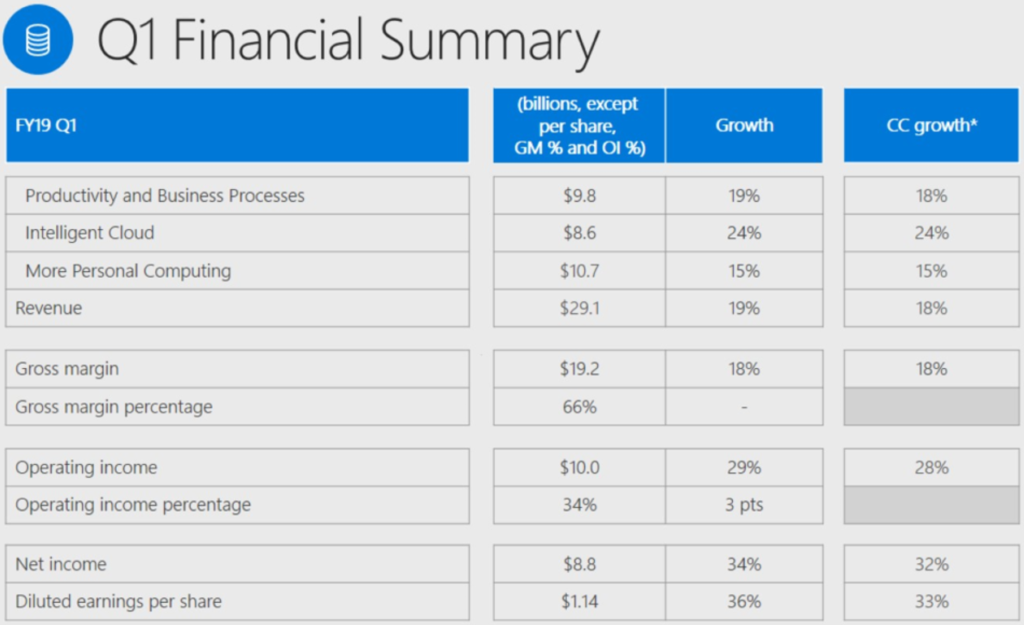 Microsoft has effectively monetized its LinkedIn acquisition. It has been more than two years since Microsoft announced plans to acquire LinkedIn, although the acquisition closed in December 2016. But the water is only beginning to boil — just yesterday the Bing ads team announced profile targeting that leverages LinkedIn data for search campaigns.

After Microsoft closes its $7.5 billion acquisition of GitHub, we’ll be watching to see if it can manage that investment as successfully. The EU only approved Microsoft’s GitHub acquisition last week.

The steady growth of Surface is no longer questionable — five $1 billion quarters will do that. Earlier this month, Microsoft held a Surface hardware event in New York City, where it announced three refreshed devices: Surface Laptop 2, Surface Pro 6, and Surface Studio 2. A week later, we learned Microsoft had for the first time become a top 5 PC vendor in the U.S. That said, because Microsoft doesn’t break out Surface sales, we still don’t know how, for example, the new Surface Go is selling compared to the older Surface Book 2.