Analysts had expected Microsoft to earn $32.2 billion in revenue and report earnings per share of $1.24. The company thus handily beat expectations. The company’s stock was flat in regular trading, and also flat in after-hours trading. Microsoft said it returned $7.9 billion to shareholders in the form of share repurchases and dividends during the quarter.

“The world’s leading companies are choosing our cloud to build their digital capability,” Microsoft CEO Satya Nadella said in a statement. “We are accelerating our innovation across the entire tech stack to deliver new value for customers and investing in large and growing markets with expansive opportunity.”

We largely attribute the consistent quarterly wins to Nadella’s plan to turn Microsoft into a cloud company. In 2017, Microsoft’s cloud annualized run rate passed $20 billion, ahead of schedule. That number has now effectively doubled. 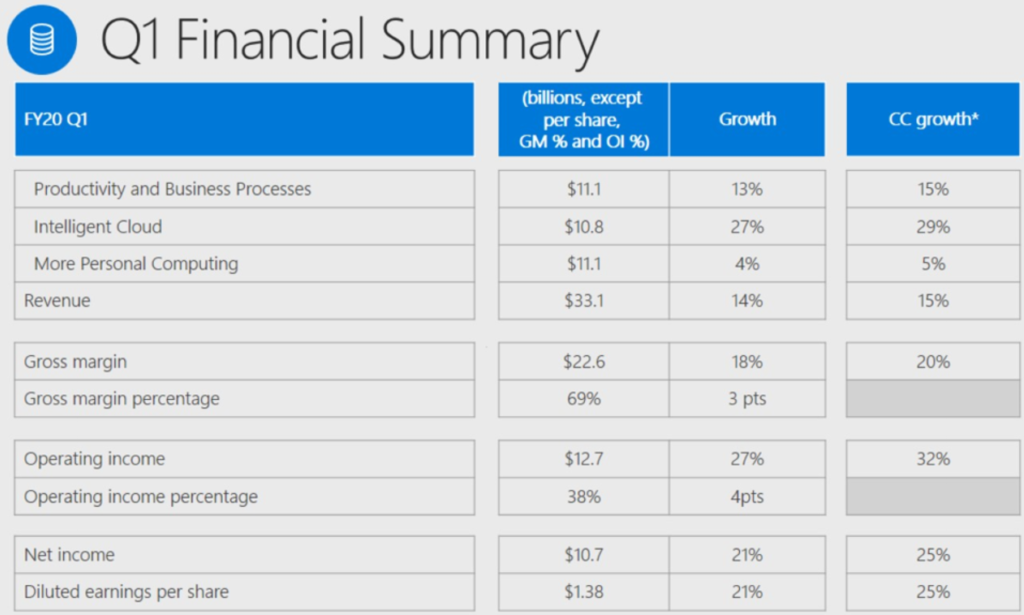 Thirty-five million consumer subscribers of Office 365 is significant, but it naturally pales in comparison to the enterprise side. In fact, this past quarter, Microsoft passed 200 million monthly active Office 365 business users (up from 180 million reported the last few quarters).

That growth contributed to overall revenue gains. Microsoft Office continues to be a cash cow for the company, with the pivot to an Office 365 subscription business largely deemed a success. Microsoft has also successfully monetized its LinkedIn acquisition, which closed in December 2016. Double-digit growth for LinkedIn has been consistent for multiple quarters now.

A 59% revenue increase for Azure indicates continued slowing cloud growth for the company. That figure has been falling steadily lately: 76% in Q2 2019, 73% in Q3 2019, 64% in Q4 2019, and now 59% in Q1 2020. Some of this is to be expected — growth has to slow eventually. Nonetheless, Microsoft will need to control the message — if not growth, then what? Microsoft does not break out exact Azure revenue numbers, likely to avoid comparisons with industry leader AWS.

Surface continues to bring in $1 billion quarters. That said, Q1 is typically the company’s worst corner for Surface, and Q1 2020 was no different, with just $1.14 billion in revenue (compared to $1.18 billion in Q1 2019). That is likely because many were waiting for the company’s annual hardware event, which took place earlier this month. The company refreshed its lineup with the Surface Laptop 3, Surface Pro 7, Surface Pro X, and Surface Earbuds in time for the holiday season. We won’t know how those fare until next quarter, of course. This was easily the company’s biggest Surface event in years — Microsoft also unveiled dual-screen devices coming in 2020: Surface Neo and Surface Duo.

Another disappointment in Q1 2020 was Microsoft’s gaming revenue, which fell 7%. Microsoft did not break out Xbox Live monthly active users as it usually does. In fact, this is the least we’ve seen Microsoft discuss Xbox and gaming in its earnings report in years.