Analysts had expected Microsoft to earn $32.5 billion in revenue and report earnings per share of $1.09. The company thus barely met, but did not beat, expectations. The company’s stock was up 3 percent in regular trading, but down 3 percent in after-hours trading. Microsoft said it returned $9.6 billion to shareholders in the form of share repurchases and dividends during the quarter.

“Our strong commercial cloud results reflect our deep and growing partnerships with leading companies in every industry including retail, financial services, and healthcare,” Microsoft CEO Satya Nadella said in a statement. “We are delivering differentiated value across the cloud and edge as we work to earn customer trust every day.” 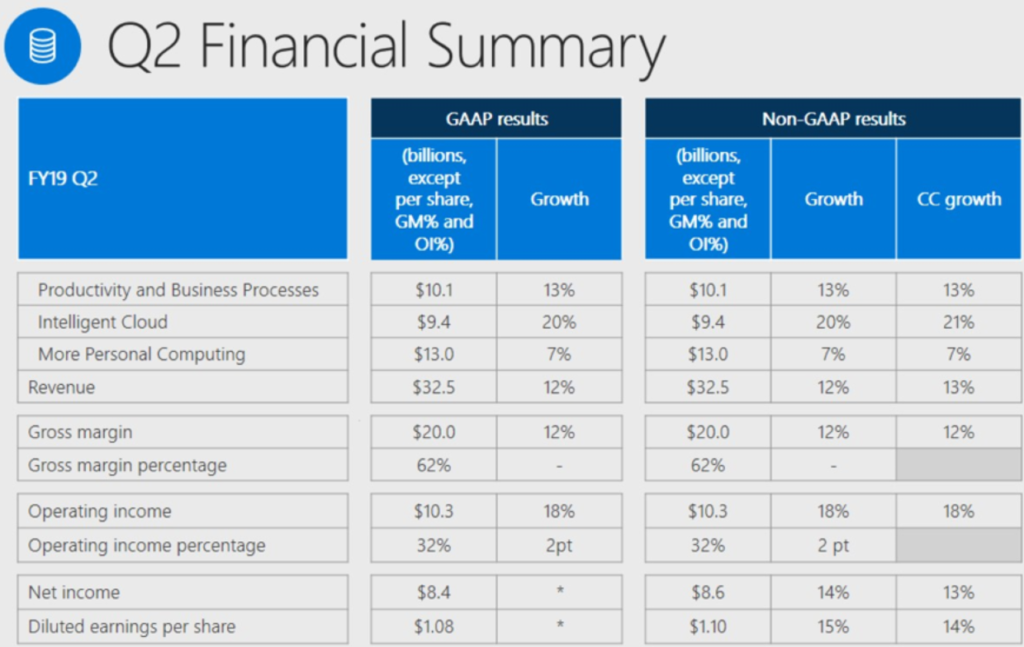 Microsoft has successfully monetized its LinkedIn acquisition. It has been more than two years since the acquisition closed in December 2016. But there is still plenty of run rate — various divisions at the company are only getting started with figuring out how they can integrate with the platform.

The question is whether Microsoft can do the same with its $7.5 billion acquisition of GitHub, which only closed in October. The above tweet shows Microsoft is including GitHub numbers under its Intelligent Cloud division (specifically under server products), but the company didn’t break GitHub out in its earnings release. That will likely come next quarter.

The steady growth of Surface continues — $1 billion quarters are the norm, and at $1.86 billion this quarter, the $2 billion mark is suddenly in reach. In September, Microsoft held a Surface hardware event in New York City, where it announced three refreshed devices: Surface Laptop 2, Surface Pro 6, and Surface Studio 2. In time for the holiday quarter, those likely contributed to the results. Microsoft doesn’t break out Surface sales, however, so we still don’t know how, for example, the Surface Go sells compared to the Surface Book 2.

In Q3, Microsoft became a top 5 PC vendor in the U.S. Earlier this month we learned that the company held its position in Q4, showing that it wasn’t just a one-time blip.