Analysts had expected Microsoft to earn $32.8 billion in revenue and report earnings per share of $1.08. The company thus handily beat expectations. The company’s stock was flat in regular trading, but up more than 2% in after-hours trading. Microsoft said it returned $7.7 billion to shareholders in the form of share repurchases and dividends during the quarter.

“It was a record fiscal year for Microsoft, a result of our deep partnerships with leading companies in every industry,” Microsoft CEO Satya Nadella said in a statement. “Every day we work alongside our customers to help them build their own digital capability — innovating with them, creating new businesses with them, and earning their trust. This commitment to our customers’ success is resulting in larger, multi-year commercial cloud agreements and growing momentum across every layer of our technology stack.”

The consistent quarterly success can be attributed to Nadella’s plan to turn Microsoft into a cloud company. In 2017, Microsoft’s cloud annualized run rate passed $20 billion, ahead of schedule. That number has now effectively doubled. 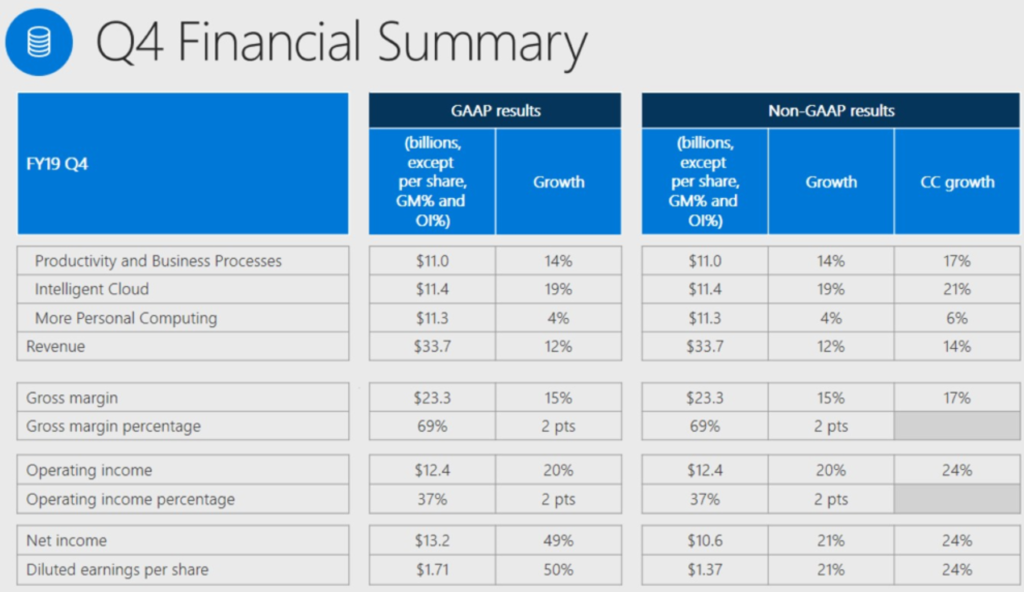 Nearly 35 million consumer subscribers of Office 365 is significant, but it naturally pales in comparison to the enterprise side. Microsoft has more than 180 million monthly active Office 365 business users.

Microsoft has successfully monetized its LinkedIn acquisition, which closed in December 2016. It’s not clear whether Microsoft can do the same with its $7.5 billion acquisition of GitHub, which closed in October. GitHub is being called out under the company’s Intelligent Cloud division (specifically under server products), but it’s still not broken out, presumably because revenue there is not significant enough.

Surface continues to bring in $1 billion quarters. While Q2 was a $1.86 billion quarter for Surface, Q3 saw $1.33 billion and Q4 saw $1.35 billion. Those numbers reflect no refresh of existing Surface models (an update is expected in October). Microsoft started shipping the Surface Hub 2S in June, starting at $8,999 and going up to nearly $12,000. Maybe a full quarter of such price tags will juice up Surface revenue to the $2 billion range.

A growth rate of 64% from Azure is nothing to scoff at, but it is another indication of slowing growth. That figure used to be over 100%, and most recently it had fallen to the 70% range. Microsoft does not break out exact Azure revenue numbers, likely to avoid comparisons with industry leader AWS. The biggest disappointment in Q4 2019 was Microsoft’s gaming division, which saw Xbox hardware revenue drop 48% (though Xbox Live monthly active users grew 14% to 65 million).