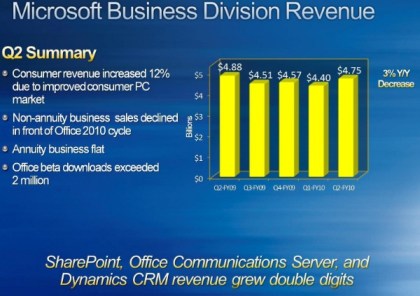 Microsoft posted strong earnings for the final three months of 2009, but some parts of its business have been having a harder time, executives acknowledged during an analyst conference call this afternoon. The company’s good news was driven by strong sales of Windows 7, while business sales are lagging.

There’s a clear contrast in the revenue numbers Microsoft posted today. During the last three months of 2008, business revenue outpaced Windows and Windows Live revenue, $4.9 billion to $4.1 billion. A year later, Windows leaped past to $6.9 billion, while business revenue fell slightly to $4.7 billion.

“While we have yet to see a return on business spending growth, the consumer segment continues to perform better than expected,” said Bill Koefoed, Microsoft’s general manager of investor relations.

The question-and-answer session at the end of the call seemed pretty brief, but Microsoft found time for a few answers about the enterprise sales. Chief Financial Officer Peter Klein said that it’s taking longer and longer to close those sales, and there’s sometimes a gap between the expiration of old deals and the start of new agreements — but in most cases, Microsoft isn’t losing those customers.

One analyst asked whether Microsoft expects things to remain sluggish in the coming months.

“The thing that I can say is that we have the great product pipeline,” Klein said. “We don’t have visibility into exactly what business spend will be, so we’re just going to have to work through that in the next couple quarters.”

During the just-ended quarter, Microsoft also continued its cuts with another 800 layoffs. The company’s scheduled releases this year include Windows Mobile 7 (which Microsoft is expected to demo at the Mobile World Congress in February) and Office 2010.