Microsoft is providing new information today about increases to the power efficiency of its Edge browser with the release of the upcoming Windows 10 Anniversary Update. Users will automatically receive these improvements once they’ve installed the update; there’s no special power-saving mode that needs to be enabled.

Also today, Microsoft is releasing benchmarks showing that Edge (specifically a fully patched version of the November update, Build 1511) is already more power-efficient than other browsers, including Google Chrome, Mozilla Firefox, and Opera, when its battery saving mode is turned on. The benchmarks are based on tests of Microsoft’s internal lab infrastructure — making the browsers scroll through articles and watch videos on Facebook, YouTube, Google, Amazon, Wikipedia, and other sites, and also by observing how long the browsers could stream the same high-definition video continuously.

“A lot of the power efficiency comes from ‘better together’,” Jason Weber, director of the web platform team for Microsoft Edge, told VentureBeat in an interview.

Above: Microsoft Edge battery life benchmark in an internal test.

Edge was built to be released on top of Windows 10 (unlike its predecessor, Internet Explorer), and that yields advantages not just in terms of battery usage but also performance, Weber said.

“The fact that we can get 50 percent better battery life on most of these areas than our competitors we feel is a really significant achievement,” Weber said. “If you have a 3 percent or 5 percent difference, users don’t necessarily feel that, but when you get up to, you know, 30, 40, 50 percent, it could really make a huge difference in your day.” 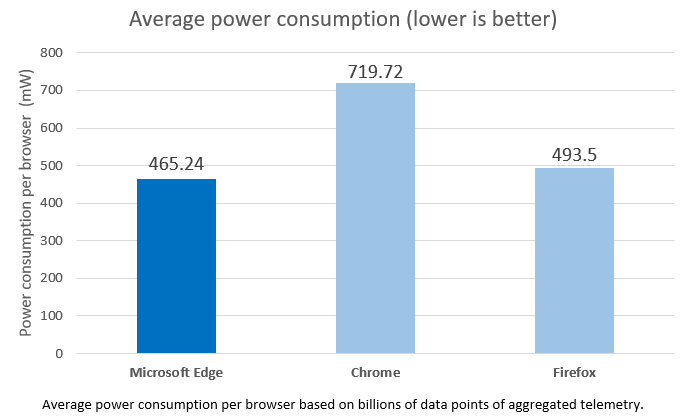 Above: Real-world testing of Microsoft Edge versus Chrome and Firefox.

The Anniversary Update of Windows 10 should bring even better battery usage for Edge. There are four areas where Microsoft has made many changes: