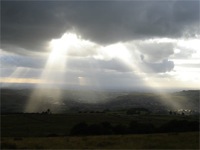 Microsoft, the king of traditional, desktop-based software companies, has two pieces of news today showing its movement into the Internet cloud. First, Amazon said its Elastic Compute Cloud — its popular environment for running web applications — will now support the Microsoft Windows Server. Then, Microsoft chief executive Steve Ballmer talked some more about Microsoft’s operating system for the creation of web apps, which will be formally announced in a Los Angeles developer conference at the end of October. Ballmer calls it “Windows Cloud.”

The Microsoft CEO previously discussed Windows Cloud under its code name Project Red Dog. While additional details were not forthcoming, the new nickname and description as a “web operating system” give some sense of the ambition involved. Windows Cloud is the latest in Microsoft’s efforts to move aggressively online; other recent moves in this area include testing a version of Microsoft Office that’s delivered via online subscription (also known as the software-as-a-service business model), as well as trying to link all of your electronic devices though a service called Live Mesh.

Windows Cloud could open up another front in Microsoft’s war with Google, which launched Google App Engine, its own environment for building and deploying web apps, earlier this year. It could also make Microsoft a competitor with Amazon’s Web Services.

Speaking of Amazon, support for Microsoft Windows has reportedly been a big demand among Amazon customers. Previously, EC2 was limited to Linux and other Unix-based systems. Now, as Chief Technology Officer Werner Vogels says, Amazon can run “the majority of popular software systems in the cloud.” Among other things, that means EC2 now supports ASP.NET websites, and can also support a single global Windows desktop that’s accessed from multiple locations.