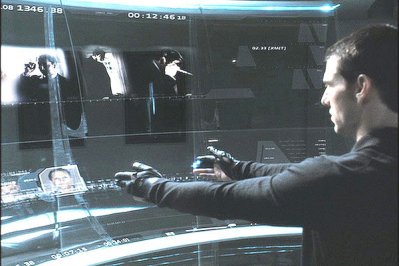 The comparisons between Microsoft’s Kinect body-gesture motion-control system and the cool gesture-controlled computer in the 2002 sci fi movie Minority Report are getting old, but I can’t help but think of that film when looking at developer Florian Echtler’s multitouch interface hack (see video below) for Kinect.

We reported earlier in the week that Kinect was hacked only a few days after its November 4 release, but at the time all hackers had to show for it was video of simple sensor readings. Now, there’s a functioning demonstration of Kinect being used for multitouch gestures — which honestly looks a lot like Microsoft’s Surface tabletop multitouch technology, except it’s on your TV.

Echtler accomplished the hack by hooking the open source Kinect driver that’s floating around the web to his custom multitouch software library. His hack is rough, but functional, and it’s definitely a sign that Microsoft could eventually offer the same sort of multitouch functionality for browsing pictures directly on the Xbox 360.