Microsoft today announced its content aggregation and presentation application Sway is launching on the iPhone. Initially available in New Zealand, the iPhone version will roll out to the U.S. and other English-speaking countries “soon.”

For context, Sway launched in preview on October 1 as the first new product joining the Office product family in years. The premise is simple: Let users create presentations for the Web using text, pictures, and videos, regardless of what device they’re using.

At the time, the Sway preview debuted for Internet Explorer, Chrome, Firefox, and Safari. Microsoft promised an iOS app would arrive next, followed by Android and Windows Phone versions in the coming months. 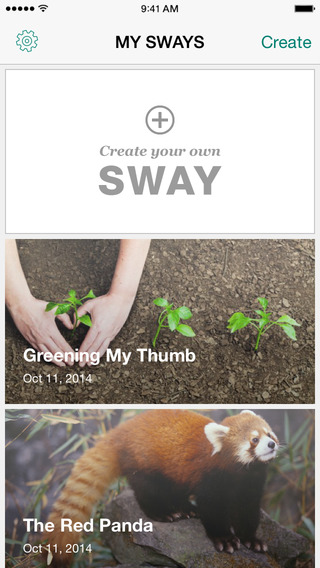 If you’re in New Zealand, you can download the app now from Apple’s App Store (the listing says the app was published on October 31, but Microsoft is only officially announcing the news today). Microsoft is also using the app as a way to expand the preview to more users: The company says that if you sign in to Sway for iPhone, you will automatically be able to use the Sway preview on the Web as well.

Launching first in New Zealand has become a common practice for testing new Web apps and features. Companies like Facebook often use the country as a test market, because it has a small population and the spoken language is English.

The roll out then continues to other English-speaking markets and then eventually the translations follow. Sway looks like it will follow this exact model, at least on the iPhone.

It’s unfortunate to see Microsoft once again prioritizing a third-party platform over Windows Phone, yet this happens more often than not. Hopefully, the other mobile apps will be made available before the end of the year.

The iPhone app aside, Microsoft says it is inviting “thousands of people from our waitlist” to join the Sway preview. You can sign up to wait for an invite on Sway.com.