Microsoft today launched a new video-editing app for Windows Phone and Windows tablets called Movie Creator. You can download the app, currently in beta, directly from the Windows Phone Store (164MB) and the Windows Store (189.7MB).

Update: Microsoft has confirmed with VentureBeat that Movie Creator only works on Lumia phones and the Lumia 2520 tablet, and on Surface tablets running Windows 8.1. 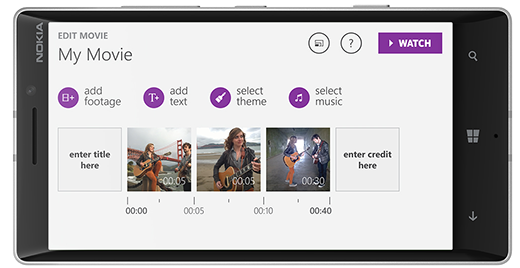 The app is quite powerful. It lets you edit the length of your footage, freely move clips to different places on your video timeline, as well as add text cards, captions, and various filters. You can even pan, zoom, and rotate. Your final result can be anywhere from a few seconds to as long as a few hours.

Here are the features Microsoft emphasized: 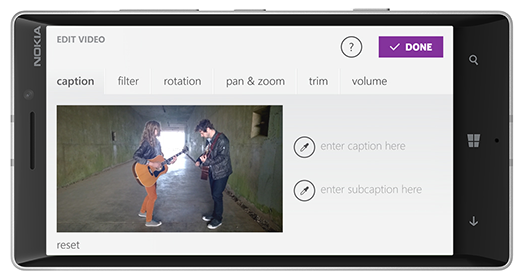 There are two curiosities with this launch. First, Microsoft already has a similar app for Windows Phone called Video Tuner — why release another with similar functionality?

Video Tuner is only available for Lumia devices, something that made a little bit more sense before Microsoft acquired Nokia. Our best guess is that Movie Creator will be offered to all Windows Phone devices and replace Video Tuner when it comes out of beta.

Update: “Actually, these apps have two very distinct value offerings,” a Microsoft spokesperson told VentureBeat. “Video Tuner’s great for editing single videos; Movie Creator is better for editing many videos (and images and cinegraphs — up to 25) together into longer, professional-looking videos. Movie Creator’s launch does not affect Video Tuner at all.”

Second, the app store page says the Windows tablet version only works on Lumia tablets, which seems bizarre given that only one device that fits that category: the Lumia 2520. While Microsoft has shared its plans for Lumia smartphones, the company hasn’t clarified what it plans to do with the brand on larger devices (and many believe it will just stick with the Surface line for tablets).

We have contacted Microsoft for more information and will update this article if we hear back.

Update: A Microsoft spokesperson confirmed that this app does not work on all Windows Phone devices and Windows tablets. It only works on the company’s phones and tablets (Lumias and Surfaces), and we’ve updated the article to reflect this.

This update is quite disappointing. When Nokia owned Lumia, it made sense for the company to differentiate its apps by only offering them for its own devices. Now, however, Microsoft should build apps for Windows Phone and Windows, not just Lumia and Surface. Hopefully when Movie Creator comes out of beta, this will change. Otherwise, Microsoft is just hurting its own ecosystems.