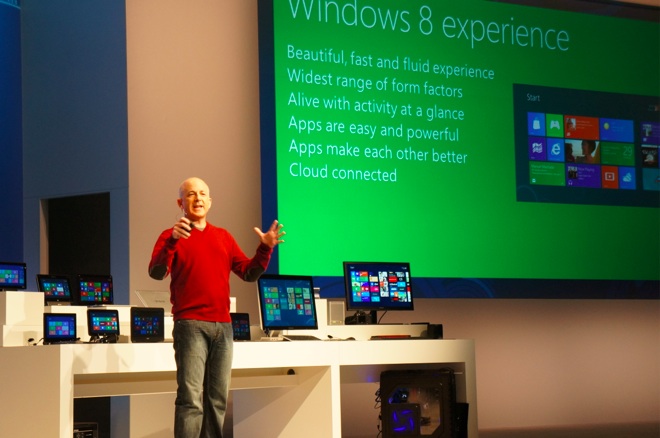 Microsoft today kicked off the launch of its Windows 8 Consumer Preview with a media event in a swanky Barcelona hotel.

Windows head Steven Sinofsky kicked off the event by describing the vast amount of devices and users the company is targeting with the Windows 8 operating system. The company’s goal with the OS spans across tablets of all sorts: business desktops, consumer tablets, and more. He revealed that Microsoft has made over 100,000 major code changes to Windows 8 since the Developer Preview was released in September.

Sinofsky then handed the show off to Julie Larson-Green, Windows VP of program management. She showed off the basics of the OS, as well as how fluid the Metro interface is. Things seem a lot smoother than the Developer Preview. She said that the new Start screen is built to support hundreds of apps, while the Windows 7 Start menu could only show a handful. 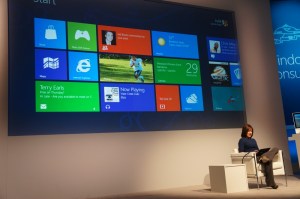 Antoine Leblond, vice president of Windows Web Services, showed off how the OS ran on a typical computer with a mouse and desktop. Simple tasks like copying and pasting have been drastically improved in Windows 8. Now, you can easily manage copying multiple files at once. He also showed how easy it is to move between the Windows 8 Explorer view back to the Start screen. Basically, it looks like you won’t miss the traditional Start button too much.

Sinofsky announced the eight winners of Microsoft’s “First App” contest: Cookbook, SigFig, Elements Weather, FlipSaw, Pew Pew, and Physamajig. As winners, the apps will be included with the Windows 8 Consumer Preview. Sinofsky stressed that all of the apps currently available for Windows 8, including third-party apps, are still technically in beta, so we shouldn’t make final judgements on them just yet.

Michael Angiulo, corporate VP of Windows planning and ecosystem, next came on stage to show off some Windows on ARM (WOA) devices. He stressed that Windows on ARM “is the same Windows” — though as we’ve already covered, that’s not necessarily true. Notably, WOA devices won’t be able to run non-Metro Windows applications — so long legacy software.

Sinofsky said that Microsoft developed a new class driver for Windows 8, which allows all sorts of hardware to work seamlessly with the OS without needed a separate driver. He said that 80 to 90 percent of printers will work automatically. “It just works,” he said. 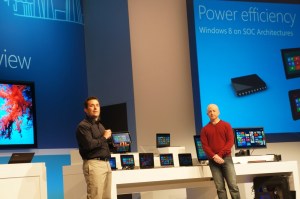 They proceeded to show off different types of Windows 8 hardware, including ultrabooks, more powerful laptops, and desktops. One ultra book sported a motorized mechanism to reveal full-sized ports, something that the MacBook Air and other ultra-portables give up on. (Honestly, that mechanism looked whack.) The Lenovo Yoga, an ultrabook that can convert into a tablet, looked far more useful.

One of the more intriguing devices was a big-screen monitor that could be rotated flat, allowing you to use it like a Microsoft Surface display. They also showed off a ridiculously large 80-inch touchscreen running Windows 8, with a specially bonded Gorilla Glass display that allows for group collaboration. (A very rich group, I’m sure.)

Sinofsky said that Microsoft will follow its past release schedules with Windows 8: next up is the Release Candidate version, then the Release to Manufacturer (RTM) version. After that, Windows 8 will finally be available to the public.

And trust me, this is not one Windows release to be ignored. From the looks of it, Windows 8 is a sign of Microsoft’s approach to operating systems for the next decade.