In addition to migrating the project, Microsoft is also dropping the Microsoft Research License that’s been on it since it became available on CodePlex in April 2015 — the license limits the software to non-commercial uses — in favor of a more permissive MIT license.

“The reason we did this is we want to give our users flexibility to make changes,” Microsoft chief speech scientist Xuedong Huang said in an interview with VentureBeat. “That strengthens the ecosystem and the toolset we have.”

Deep learning is an increasingly popular type of artificial intelligence. The approach involves training artificial neural networks on a large set of data — recordings of a person speaking, for instance — and then getting them to make inferences about new data. Baidu, Facebook, Google, as well as Microsoft have been building up talent pools and technology in this area, and they have all released open-source code in the past.

Microsoft’s Cortana personal digital assistant, a prominent feature of Windows 10, uses CNTK for speech recognition purposes, Huang said. But the software can also come in handy for other workloads, like image recognition, or even natural language processing. For instance, Microsoft has called on CNTK to run experiments for ranking web search results and predicting the ads that people will click on, Huang said. 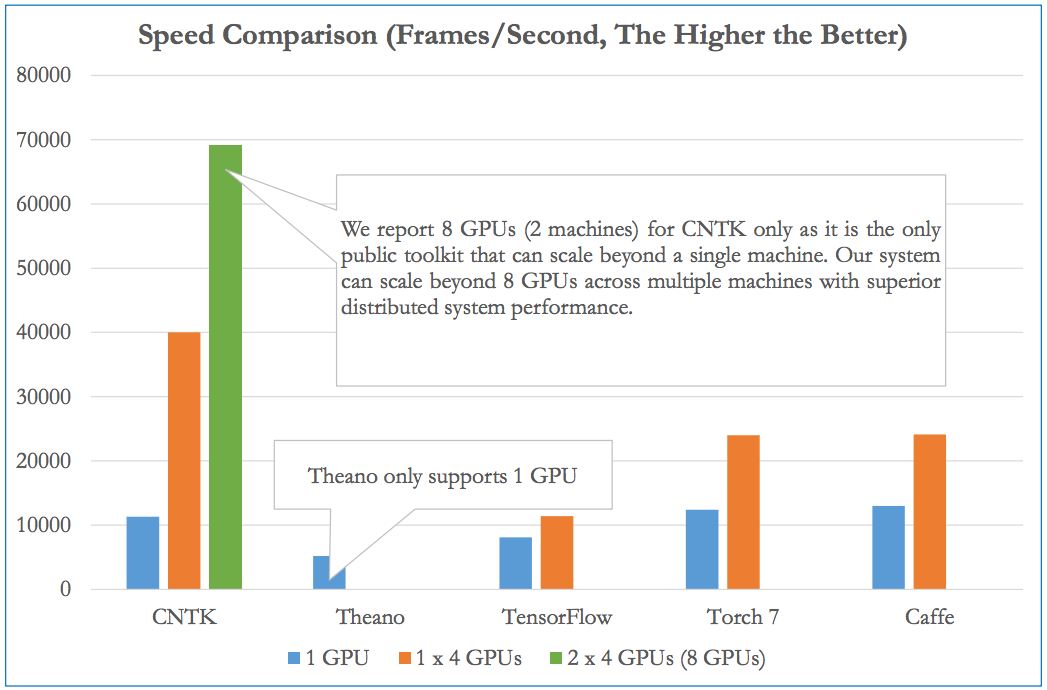 Above: A benchmark of CNTK versus other open-source deep learning frameworks.

CNTK is one of many general-purpose deep learning frameworks available for anyone to use under an open-source license.

But Huang points out that it’s the only one that can scale beyond a single server, and not just beyond more than a single graphics processing unit (GPU). But even when using a single server, CNTK has performed better than alternatives like Theano and Google’s TensorFlow in Microsoft’s own benchmarks (PDF).

Written in C++ and integrated with the Nvidia cuDNN 4 library, the CNTK framework comes with image, speech, and text demonstrations. “We do not support Python yet,” Huang said. “We are very anxious to really get feedback from the community and improve the platform.”

CNTK is not the first Microsoft software project to go from CodePlex to GitHub. Others that have made the journey include Roslyn and TypeScript.