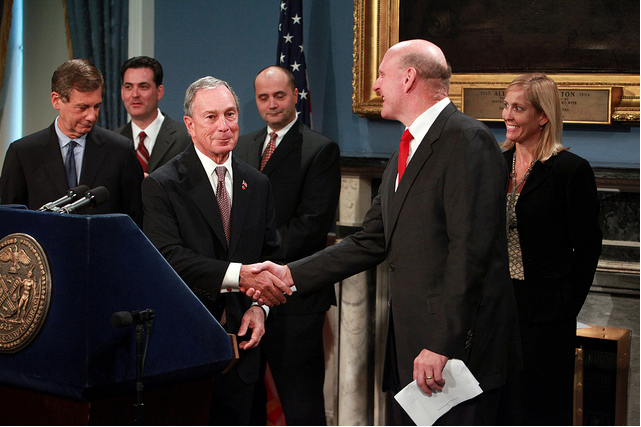 Earlier this week, VentureBeat reported on New York City’s efforts to modernize its government. The Big Apple is moving ahead quickly, announcing a partnership with Microsoft today that will anchor the city’s technology infrastructure firmly in Microsoft’s cloud.

The five-year deal will move the city’s 30,000 employees to Microsoft’s Internet-based service, including email, instant messaging, and collaboration tools like SharePoint. The deal will also deliver email to an additional 100,000 city employees who currently lack a work account. Microsoft will also aid the city and third-party developers in creating customized apps on the company’s Azure cloud platform.

“We have a network of business partners, 20,000 in the State of New York, who we’re now trying to galvanize,” Microsoft CEO Steve Ballmer said at today’s press conference.

City agencies had previously purchased software individually, but once Mayor Michael Bloomberg made the decision to centralize purchasing decisions and technology strategy, the city went looking for a deal.

“[The deal is] the first of its kind in the nation,” Bloomberg said. “This essentially allows the city to only pay for what it uses.”

The Mayor’s Office claimed the city will save $50 million over the course of the deal. The deal was a renegotiation and consolidation of a number of previous deals between New York City and Microsoft.

In addition to Microsoft’s cloud platform, negotiations are ongoing to bring Windows Phone 7 to New York City employees, according to City Hall sources.

A member of the city’s staff told VentureBeat that Google did not have a chance to bid on the contract, which would appear to be a blow to Google’s enterprise push. Google has already encountered problems while transitioning the City of Los Angeles to Google Apps.

As the largest municipal government in the nation and the only one led by a billionaire tech entrepreneur, New York City provides a major vote of confidence for cloud computing. While proponents have touted the cloud’s ability to lower costs and increase efficiency, skeptics have argued that cloud technology was too insecure for enterprise use.

“We will demand the same security protections when we use cloud computing as when we use our own servers,” Deputy Mayor Stephen Goldsmith said.

The city was primarily interested in the savings and agility provided by cloud computing. While city agencies currently operate 50 data centers, the deal will consolidate these operations into one modern facility. This will allow the city’s tech managers to focus on innovation strategy and implementation rather than maintaining the city’s IT infrastructure.

Goldsmith mentioned after the press conference that the city would focus on assembling data, both from internal sources and social media conversations, in forms that are most useful to the city and third-party developers.