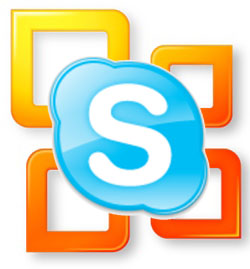 We could be seeing the first result of the Skype-Microsoft union with Office 365, Microsoft’s new cloud office suite.

Details on the addition of Skype, a massively popular chat application, to Office 365 were vague during yesterday’s launch. That’s because, while U.S. regulators are allowing the merger to move forward, Microsoft is still awaiting approval from antitrust regulators in other countries.

On the Seattle Times’s site, Kurt DelBene, president of Microsoft’s Business division, mentioned Skype in connection with Lync, Microsoft’s rebranded and revamped instant messaging, audio- and videoconferencing product. “The ability to connect Lync users with Skype users is a huge opportunity for us,” DelBene said.

So it’s probably safe to assume Skype and Lync will be, well, linked together. PCWorld has a great report on why Lync is a necessary addition to Office 365. More and more small businesses require the virtual functionality of realtime communications as their employees travel abroad or collaborate in far-flung offices.

Office 365 will become generally available on June 28 and will get quarterly software updates, according to Microsoft. Prior to the Office 365 announcement, Microsoft said Skype’s technology would eventually be added to Xbox 360 and Kinect, Windows Phone and software like Outlook.