Microsoft’s Ignite conference starts today in Orlando, Florida, where the company is expected to announce updates across its product portfolio. More than a few were revealed this morning on the Microsoft 365 side of the business, which encompasses not only Office 365 products like Word, PowerPoint, Excel, and Outlook but Yammer, OneNote, and OneDrive.

A preview of Ideas in Word for the web is rolling out for Office 365 commercial users. It’s an AI-powered proofreader that taps natural language processing and machine learning to deliver intelligent, contextually aware suggestions that could improve a document’s readability. For instance, Ideas in Word will recommend ways to make phrases more concise, clear, and inclusive. And when Ideas in Word comes across a particularly tricky snippet, it will put forward synonyms and alternative phrasings, like “society” as a substitute for “society as a whole.”

With each suggestion, Ideas in Word will provide justifications and explanations, such as why “then” should be used in place of “than” in a specific context. It’ll also offer estimated reading times and extract and highlight key points in paragraphs, as well as underlining potentially sensitive geopolitical references and decoding acronyms.

Office scripting, a new process automation feature that allows actions to be recorded inside a workbook and saved to a script, will arrive in Excel by the end of the year. Users will be able to integrate saved scripts with Microsoft’s Power Automate and schedule them to run automatically as part of a larger flow.

Additionally, Excel users who’ve opted into the Office Insiders program will soon begin to see a new natural language query function that will allow them to ask questions of data and get answers without having to write formulas. Once they enter a question in the query box at the top of the Excel pane, the function will provide answers supported by formulas, charts, or pivot tables.

A separate Sheet View component, which is generally available, allows users to sort and filter data before saving the results as a separate view. Resulting views can be saved to be sorted, filtered, and perused by other users in the document in real time, on Excel for the web. 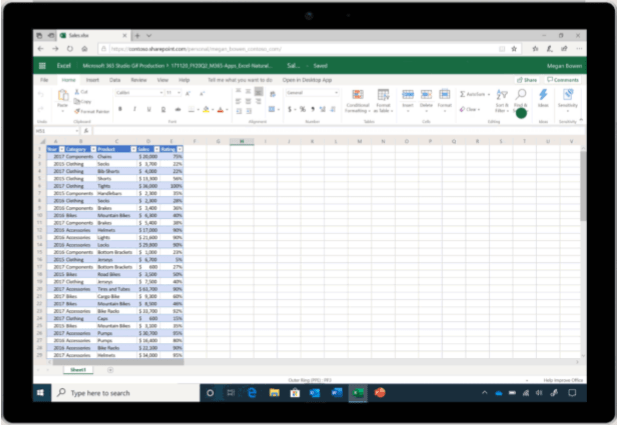 Lastly, a new XLOOKUP search function launches today. It’s the successor to Excel’s VLOOKUP and HLOOKUP functions, and it overcomes the limitations of both by introducing the ability to look up values to the left and handle column insertions and deletions.

Starting today on iOS and on Android in Spring 2020, Outlook users can “play back” emails using the new Cortana-powered Play My Emails feature, which intelligently reads out email and shares agenda changes on demand (in the U.S.). Voice commands via a Bluetooth audio device enable message replies and basic navigation.

With respect to Outlook on both iOS and Android, a new email notification experience encrypts data on a handset’s lock screen until that handset is unlocked. It’s joined by Up Next, a feature that surfaces next events in attached calendars at the top of inboxes. There’s also Meeting Insights, which suggests files and emails potentially relevant to upcoming meetings, and inferred locations, which recommends locations for recurring calendar events. Those are in addition to a revamped search experience that displays multiple panes on tablets and other devices with increased screen real estate.

Above: The Cortana-powered Play My Emails feature.

By 2020 on Outlook on the web, users will be able to add personal calendars and respond to emails using AI-generated suggested replies. And on Windows, a reimagined Coming Soon option will allow them to explore updates and preview major changes, such as an enhanced search tool that shows suggested emails as a query is typed.

PowerShell for Exchange and transport

A new set of cmdlets, or lightweight Windows PowerShell scripts that perform a single function, will soon be available for public preview in PowerShell for Exchange. They’re built on REST APIs, and Microsoft claims they’re significantly faster than their predecessors.

In a related development, a number of Office 365 email transport improvements will begin rolling out in general availability starting this week. Message Recall will enable the recalling of emails already sent, while proxy address sending will let users specify mail to be sent displaying an additional alias. Lastly, IT admins will get the ability to customize receipt limits at a user level.

A new mobile Office experience — Microsoft Office Beta — launches in public preview today for Android and iOS. It’s one that unifies Word, Excel, and PowerPoint into a single app, with an Actions pane that contains shortcuts to common tasks like converting images to text, creating and signing PDFs, and sharing files among devices. The new app also lets users create quick notes using Sticky Notes, and it facilitates the sharing of files between phones and PCs via QR code and otherwise.

Microsoft Office Beta also builds in PowerPoint presentation creation tools, and Microsoft says it will add its AI-powered Designer feature, which offers up suggested design templates, in coming releases. On the Excel side, a new tile view shows individual columns in a single, editable tile. 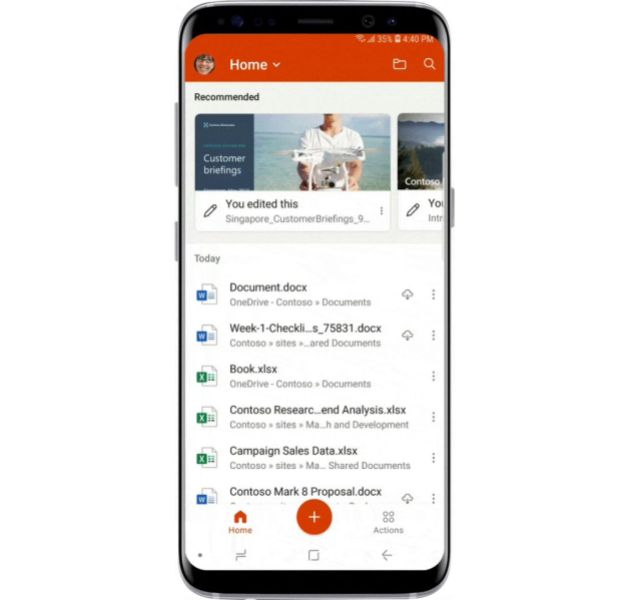 “We all want to be able to work on the go from mobile devices, and we’re always looking to simplify and improve the experience. Now you no longer need to download each app separately and will have everything you need to be productive on the go,” wrote corporate vice president for Microsoft 365 Jared Spataro in a blog post. “You can snap a picture of a document and turn it into an editable word file, for instance, or transform tables from a printed page into an Excel spreadsheet.”

As early as 2020, Microsoft will roll out a web-based self-service capability for moving content from third-party cloud storage providers into SharePoint and OneDrive. In addition, the company anticipates the launch of a new SharePoint Migration orchestration center with a unified admin console in early 2020.

In other SharePoint and OneDrive news, both services will soon (in December) support file sizes larger than 50GB, coinciding with an increase in the the SharePoint site collection limit from 500,000 site collections per tenant to 2 million. Those changes will arrive alongside the differential sync capability previewed earlier in the year, which will allow users to sync only the updated parts of large files instead of the entire file. Last, but not least, a forthcoming Request Files feature will make it easier to collect files from multiple people without showing them each other’s submissions.

On the subject of SharePoint lists, admins will soon be able to create card layouts containing content, links, and images using a no-code inline card designer. A handy native SharePoint form configuration will spotlight data by adjusting which information appears in a SharePoint list. And SharePoint Home Sites, which are rolling out now, will let users design branded landing sites that pull in news, events, content, conversations, and videos (optionally in multiple languages.)

Yammer has been redesigned from the ground up with the Fluent Design System, Microsoft says, with “dozens” of new capabilities. This latest release is designed to work with a range of devices and to integrate deeply with Microsoft Teams, SharePoint, and Outlook. To this end, Yammer lets Outlook users read, like, and reply to conversations from their inboxes. 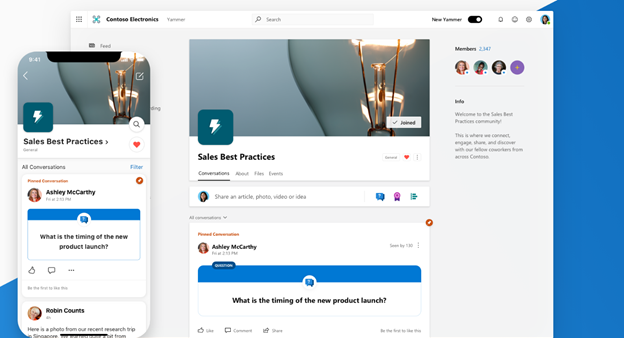 For community members, there’s added modern styling, conversation filters, new editing experiences, and the ability to favorite a community, plus a new event page experience to make it easy to discover and engage with live events. And the mobile apps for iOS and Android have been rebuilt with new styling, sizing, and iconography.

The new Yammer features a personalized conversation feed designed to connect people with conversations across their organization. Each community can be given a unique identity with branding and cover photos, and moderators can highlight conversations with pinned posts and close discussions to prevent replies. Furthermore, leaders can broadcast live and on-demand events with a production option using webcams and desktop sharing, or share experiences and messages with short videos posted directly from the Yammer mobile app.

Microsoft is supercharging Stream, its corporate video-sharing service, with new editing and AI-driven translation features. Starting in preview this week on the web and the Stream mobile app, users can customize recordings with emojis, images, and text and view the finished product in apps created with Microsoft’s Power Platform. Plus, they’re able to take advantage of the six new languages supported in Stream for automatic transcription: Chinese (simplified), French, German, Italian, Japanese, and Portuguese (Brazilian).

Early 2020 will see the rollout of New Voice enhance, which will leverage machine learning to eliminate background noise and sharpen the speaker’s voice in noisy environments.

Microsoft’s cross-platform digital canvas app — Whiteboard — is now generally available for the web and has gained five templates in public preview that target scenarios like brainstorming, sprint planning, and product planning. They’re selectable from the templates gallery, which can be accessed by tapping the Insert button in the toolbar.

As for Visio, it now supports co-editing on the web, enabling users to collaborate across Teams and Microsoft 365 in real time. The new Unified Modeling Language 2.5 diagrams — which are also generally available for Visio for the web — let users begin with blank templates or modify starter diagrams.