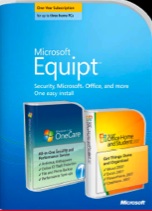 Microsoft has just revealed the details of its online office and security offering, Equipt (previously code-named Albany), which will bundle together Microsoft Office, security service Windows Live OneCare and other products for a $69.99 annual subscription.

Product Manager Bryson Gordon told the IDG News Service that Equipt isn’t really meant to be a competitor to Google Docs and other free or low-cost office products. Instead, he said, it’s a way to convince people who are buying or upgrading their security software to get the latest version of Microsoft Office, too. And it’s true that regardless of what Google is doing, this seems like a good move. Equipt’s online subscription model offers Microsoft a much steadier revenue stream. I mean, does anyone shell out for each new version of Office? Heck, just the idea of buying software out of a box seems incredibly weird to me now. By bundling with Office, it also helps Windows Live OneCare stand out against competitors like Norton 360 or McAfee.

And it could tempt people away from Google Docs. After banging my head against the wall trying to make headers work in Google Docs, $69.99 seems like a small price to pay for decent word processing software.

There is, however, one rather baffling part of the announcement — starting on July 15, Equipt will be offered exclusively through Circuit City. Hopefully, Microsoft will follow through on its promise to make the product available through other channels ASAP, but this just sends the wrong message. If you’re trying to make a serious move into a new distribution model, why would you partner with a company that epitomizes the old model? Even Blockbuster has figured out that teaming up with Circuit City is a dumb move.