REDMOND, Wash. — Following Microsoft’s announcement today about new partnerships with operating system startup CoreOS and big data company Cloudera, it’s clearer than it’s been in years the tech giant is committed to working with lots of partners and open-source technologies.

Not that the perspective has come out of nowhere. Microsoft has been steadily making adjustments to its processes and preferences to become more open — and to move more quickly to support technologies that could be of interest to its many customers, even when they’re not Microsoft-built.

And Microsoft will continue to do so in the future, at least if you believe Jason Zander, corporate vice president of development for the Microsoft Azure public cloud.

“I think what you should expect is you’re going to see us provide more and more on that open-source ecosystem,” Zander told VentureBeat during an interview in his office on Microsoft’s campus last week.

Without question, Microsoft was established on the belief that people should pay for software, not use it for free. Bill Gates and Paul Allen sold their BASIC interpreter for the Altair computer in the 1970s, going against the practice of sharing software freely, which was in vogue in computer circles at the time.

Zander doesn’t deny that. But Microsoft in recent years has become increasingly supportive of open-source software. “We try to make sure we’re bringing technologies that our customers are asking for,” he said. “It’s part of the big transformation that we’re trying to make as a company.” 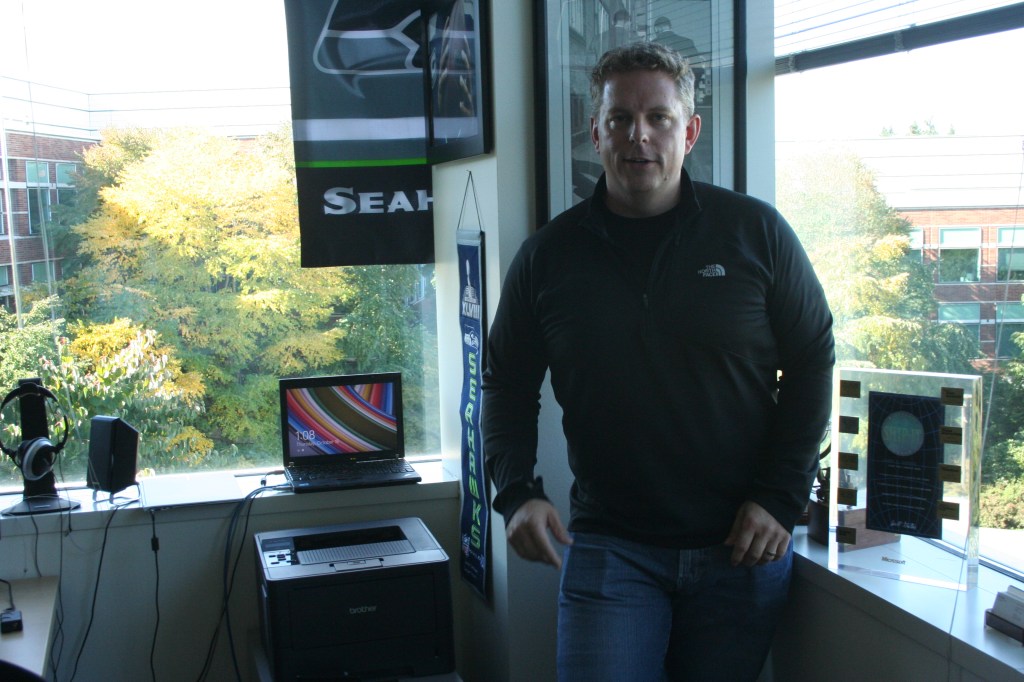 Above: Jason Zander, corporate vice president of development for Microsoft Azure, at his office in Redmond, Wash. To his right is the “ship-it plaque” he received for his work on the ODBC API for connecting to databases.

Zander has been with the company 22 years — just as long as chief executive Satya Nadella. In the past decade, though, he’s witnessed much of the changes in this area.

“If you were to go back and track the history of this, you’ll start seeing many, many open-source projects that are created with us contributing,” he said.

Zander said he himself received one of the first clearances for an open-source license at Microsoft, for the IronPython implementation of the Python language for Microsoft’s .NET framework.

On the cloud side of things, Microsoft provides language-specific software-development kits for its Azure public cloud under open-source licenses. And when Microsoft came forth two years ago with a preview release for its Windows Azure infrastructure-as-a-service public cloud — which has since been renamed to just Microsoft Azure — several distributions of the Linux open-source operating system were available right from the start. 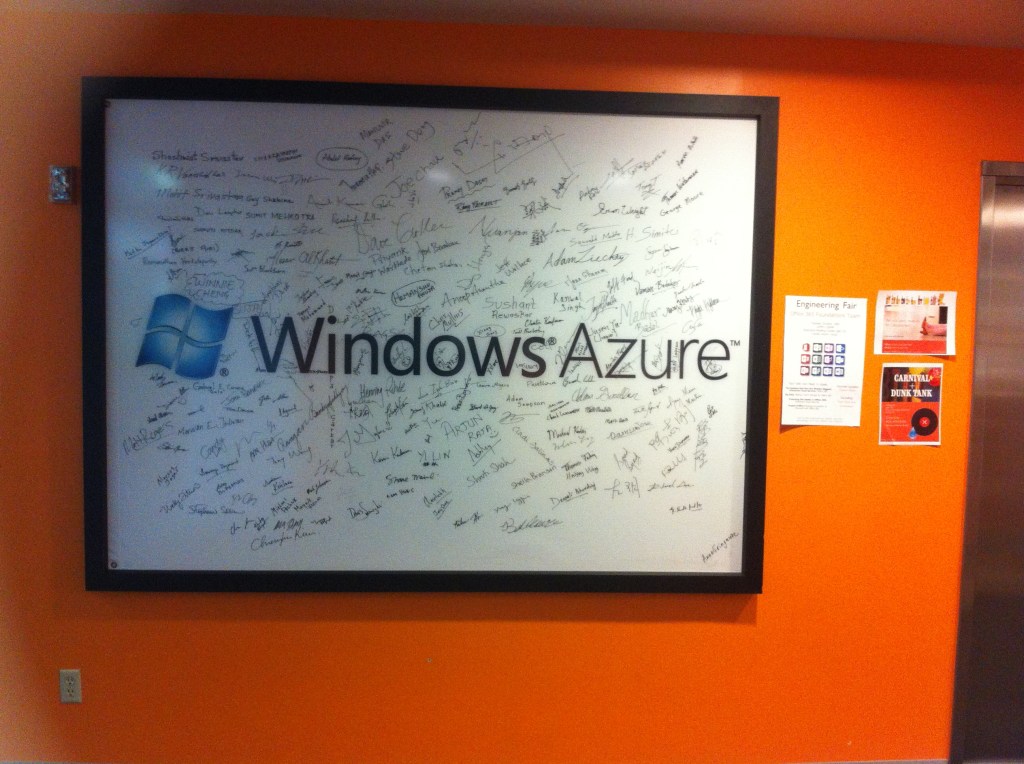 Above: A remnant of the time when Microsoft’s public cloud, Azure, carried the Windows moniker in its name hangs in building 42 on the Microsoft campus in Redmond, Wash.

And if Zander is right, Microsoft’s participation in the open-source domain will only increase — even though that is contrary to the company’s founding spirit.

Just look at the not one but two integrations Microsoft announced this year with hot open-source cloud startup Docker. It shows that Microsoft is essentially as fast as any other major tech company to jump on the bandwagon of the startup’s open-source container technology. Docker’s containers package up application code and simplifies the process of moving that code from one server environment to another, no code tinkering required.

Docker’s containers represent a supplement or alternative to virtual-machine technology for running multiple applications on a single physical server. Microsoft brings in revenue every year for the Hyper-V hypervisor software for creating and managing virtual machines. And yet, Microsoft announced this summer that it would partner with Docker, specifically around the open-source Kubernetes tool for managing Linux containers like Docker. (Meanwhile VMware, another major company in the virtualization business, also partnered with Docker.)

Then, this month, Microsoft announced it’s working with Docker on a way to run its containers on servers running the upcoming version of Windows Server operating-system software for servers. The release will mean Docker containers can run not only inside companies’ own data centers, but also on public clouds like Microsoft’s Azure and Amazon Web Services.

About that Docker thing…

The time between Microsoft’s two announcements with Docker? It took a mere three months.

In a short span of time, the people who focused on Azure, Windows, and server software figured out who would build different parts of the technology, how the company would take it to market, and how to cooperate with Docker, a small San Francisco startup.

“It wasn’t like, ‘Let’s plan this over a year,'” Russinovich said. 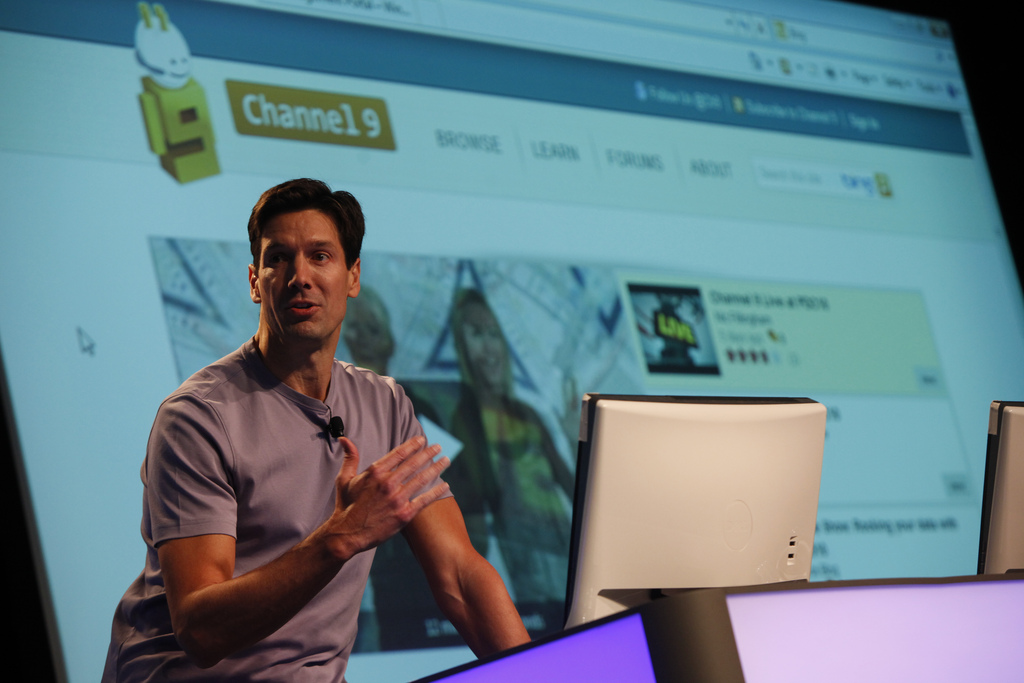 Above: Mark Russinovich, chief technology officer for Microsoft’s Azure public cloud, speaks at a conference in 2010.

But the Docker work was significant not just because it happened quickly. It demonstrated that Microsoft was wiling to support a free technology that competes with software that it sells.

“Windows was very collaborative and cooperative, despite the fact that it was disrupting them a bit,” Russinovich said. The team could have questioned the notion of adopting someone else’s creation and opted to create an in-house substitute. But that is not what happened. The Windows team instead moved to work with the creations of the little startup called Docker.

And that, right there, aligns with the strategic thinking at the heart of the Azure team. It wants to let people use Microsoft’s technology, even if sometimes that might mean not everything is 100 percent Microsoft. 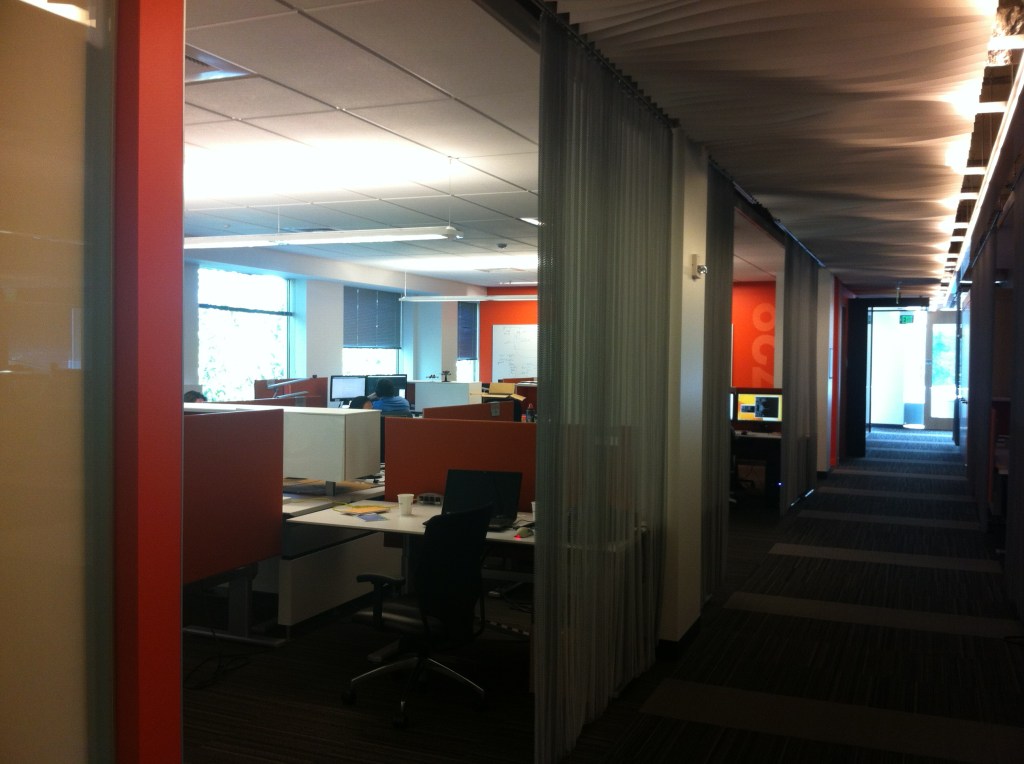 Above: Engineers work on the Microsoft Azure cloud inside Building 42 on the company’s campus in Redmond, Wash.

Developers are picky and want to use the tools they like. Now the infrastructure provider must be open to the use of a wide range of tools if it wants developers to choose its underlying infrastructure. Microsoft seems to have gotten that message.

“If we became a Windows cloud with Microsoft technology on top of it, we would just not be competitive, because we wouldn’t be meeting the needs of customers,” Russinovich said.